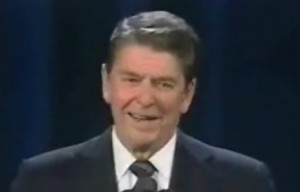 When I first read that the DNC had released another ad beating the dead horse that is the “Mitt-flopping” narrative, my first thought was that they really need to call the guy who made this ad, which breaks fresh ground in the campaign against Mitt Romney. Then, I caught a bit of the ad on Hardball, and was shocked to see the ad make cheap use of an old Ronald Reagan clip. I was even more shocked to learn that I’m apparently the only one who cares. I tweeted about the spot, and even though I have a lot of very vocal followers (left, right, and center), nobody agreed with me. Is this my Abe Simpson moment, or is something wrong with everyone else?

I’m not saying that it’s never acceptable to use footage of a deceased politician in a political ad. In Ronald Reagan’s case, it has become fashionable to point out that, in many ways, he was far too moderate for today’s Republican Party, and even that President Reagan lines up more with President Obama than any of today’s GOP leaders. Indeed, President Obama himself frequently quotes the late President in order to underscore that point.

What I am saying is that serious people ought to exercise great caution in how they treat deceased politicians, especially those with whom they disagree. The DNC’s ad notes an apparent flip-flop by Romney on the subject of the much-revered, if not outright deified, late President Reagan, then employs a clip of President Reagan saying, “There you go again,” which is from this exchange with Walter Mondale at a 1984 presidential debate:

Even though I wasn’t old enough to vote then, I insisted that my dad let me throw the switch for Mondale, since his 1980 vote for John Anderson showed he obviously couldn’t be trusted. The point is, I’m far from a Ronald Reagan fan. That’s not the point.

The DNC ad poses President Reagan’s “There you go again” as a response to Mitt Romney, which it obviously was not. It was cheap and disrespectful for the ad’s producers to have Ronald Reagan deliver their punchline from beyond the grave. He wasn’t articulating a policy position, or saying something that was substantively related to Romney’s character. It was just a cheap punchline, the delivery of which Reagan obviously has no chance to decline. Would the political media be this silent if Mitt Romney’s campaign used a clip of late Sen. Ted Kennedy in a similar manner?

Maybe they would, and maybe I’ve just progressed into the next phase of old-guy-dom, because I keep thinking things like, “Back in my day, we had respect for the dead.”

This isn’t the worst thing anyone could ever do, but the fact that it was done so casually, and that nobody seems to care at all, bothers me. I don’t want to see a flurry of ads featuring revered political figures duking it out like a proxy army of the living dead. Hopefully, we’re better than that. Or maybe, I’m just getting old. Now get off my lawn.