Liberals Freak Out Because White People Used the Word Slave 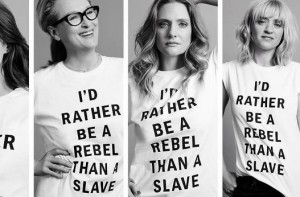 I’ve noticed that I have a habit of prefacing every column about a faux outrage with a statement to the effect that this outrage is the “stupidest of all time.” It’s occurred to me that I should stop doing this, because the perpetually outraged always, always find a way to outdo themselves.

Take the outrage this week over a photo shoot by the stars of Suffragette, an upcoming movie about British suffragette Emmeline Pankhurst. Actresses Meryl Streep, Casey Mulligan, and others posed in shirt’s featuring a quote from Pankhurst: “I’d rather be a rebel than a slave.”

Not a bad sentiment, especially in the context of the fight for women’s right to vote. But of course to many Americans, particularly those in the black community, the words “slave” and “rebel” have unfortunate connotations. Read in that light, the actresses’ shirts could be misconstrued to mean they supported the Confederacy.

Cue the handwringing on social media and in liberal outlets: 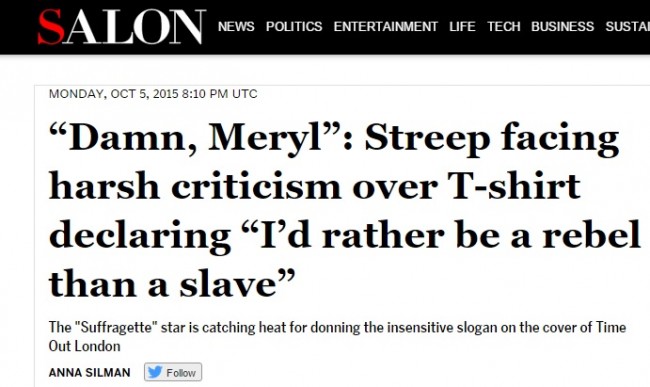 Oftentimes, these criticisms are paired with the observation of how Very, Very Problematic it is that a film set in England in the 1900’s doesn’t have any black leads, and criticism of Streep for not identifying as a feminist.

Now to reiterate, the quote on the shirt is an actual quote from Pankhurst from the 1900’s, arguably her most famous. It should go without saying that the quote was referring to the metaphorical states of slavery and rebellion, and not an American war that didn’t involve the British in the slightest. But to the critics of the shirts, the intention of the shirt did not matter. All that matters is that others found a way to be offended by it.

Now, this may come as a surprise to the activists who took offense to the shirts, but slavery was not a condition that was invented by white Americans in the 1500’s. Slavery has been a constant of human civilization since… well, since civilization began. There are no virtually no major ethnic groups who throughout history have not been both slavers and the enslaved. And yes, that includes Africans.

In fact, if there is one ethnic group who ought to have a monopoly on the word “slave” (spoiler alert: there isn’t), arguably its the Slavs. Virtually every European language’s word for “slave,” including English, derives from the mass enslavement of the Slavs by the Byzantines during the Middle Ages. To reiterate, the enslavement of the Slavs was so total and commonplace, Europeans connected the very conception of owning human beings to a certain ethic group.

For some reason the Slavs have not pushed for the same special linguistic privilege that black liberals have. Presumably, that’s because they can grasp complex concepts like “context” and “metaphors.”

The same naturally goes for the term “rebel.” Yes, many people (really just Americans) think of the Civil War when they hear that term. Probably just as many think of Star Wars, James Dean, Ms. Wilson, or any of the thousands of rebellions throughout history. Or do the Americans offended by the term really think the British called our Founding Fathers “revolutionaries” and “patriots” when we rebelled against the Crown?

Ironically, these liberals have fallen into exactly the same “problematic” notion they accuse Streep of. They’ve made slavery a uniquely American problem that only African-Americans can “own,” and by doing so have turned a deaf ear to thousands of years of oppression and suffering of disenfranchised peoples. For a group of social justice warriors who care deeply about “cultural appropriation” and “cultural imperialism,” that’s exactly what they’re doing.

Take this quote from the Vulture article on the shirts: “In a bubble, it’s a nice sentiment. But we’re not in a bubble. We’re in America…”

BZZZZZZZZ. Wrong! Let me stop you there. This was a British photoshoot in Britain for a British paper for a British movie about British women using a quote from a British woman given in a British speech to a bunch of British people in a British accent, presumably with a full mouth of horrible British teeth while sipping British tea. The notion that the British should somehow genuflect to Americans when it comes to their word choice is exactly the kind of imperialism liberals have purported to fight against for the past hundred years.

But none of that matters. Society (and the universe, really) has created a permanent class of perpetually aggrieved and victimized special butterflies and man-children. And if faux outrage is the only way to assuage their psychological need to feel angry at anything for any reason at all, faux outrage is what we’ll get.