Limbaugh: Catholic Church ‘On Its Way To Irrelevancy If It Doesn’t Start Distancing’ From Democratic Party 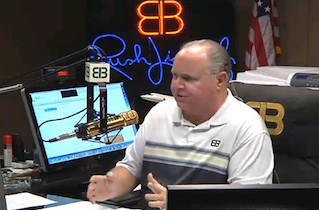 As Catholics await the white smoke signifying the election of a new pope, the media is awash with discussion about the future of the church. Rush Limbaugh took issue with some of that chatter during Tuesday’s show, asserting that the church got “roped in” to the idea that liberal ideology is associated with charity. The Catholic church, he said, should distance itself from the Democratic Party.

“It’s on the way to irrelevancy if they don’t start including women,” the Washington Post‘s Sally Quinn said on CBS’ Face the Nation, “and certainly people of other color, and ultimately homosexuals. And so, I mean, they’re all against homosexuality even though so many priests are gay.” (Bob Schieffer jumped in to say that can’t be stated as fact.)

Even Schieffer didn’t want to hear it, Limbaugh noted, adding that there’s a limit beyond which even he won’t go. “Some huzzahs there to Bob Schieffer,” he asserted, then taking issue with Quinn’s remarks, which Carl Bernstein didn’t disagree with.

“Other color?” Limbaugh asked. “People of color now has become people of other color? What is the other color? […] Is it Asian? I don’t know how these leftists think.”

Remarking that he doesn’t think of people in terms of colors, Limbaugh was incredulous. But he moved on, seeking to make his main argument. Would any liberals go on television “and say that Islam has to recognize people of other color and homosexuals if its to remain relevant?” he asked. Of course not, he answered.

But on the topic of the Catholic church and irrelevancy, Limbaugh had his own two cents to add. “I would say the Catholic church is on its way to irrelevancy if it doesn’t start distancing itself from the Democrat Party and idea that liberalism equals charity,” he contended. It doesn’t equal charity, but that’s how they got “sucked in.” And they weren’t the only ones.