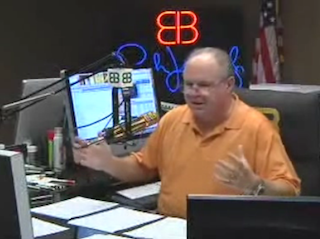 Rush Limbaugh was certainly tickled pink by today’s developments, reveling in the fact that a “reality TV star” had “forced Obama’s hand.” “Trump has a new catch phrase!” he exclaimed. Chuckling, Limbaugh explained that Donald Trump can now add “I won” right next to “You’re fired.”

In fact, despite possible objections from “purists,” Limbaugh decided to review the whole thing as if it were a reality series. After all, he said, politics is just show business for ugly people. He compared the two dueling press conferences, noting that the TV networks seemed reluctant to cut away from Trump’s triumphant one to Obama’s, which was “a bore.”

All the reality TV talk even distracted Limbaugh for a minute as he went on a tangent on his feelings about the genre, citing his own experience with it. “The only difference between reality TV and regular TV is that the writers aren’t unionized,” he said, explaining that reality show producers will get the outcome they want whether or not it actually happens (but, yes, he did get that amazing golf score for real). So, if all of politics is a reality show, why did Obama choose today’s outcome. Well, Limbaugh theorized that polling data had finally showed that keeping the issue up in the air wasn’t helping things which goes with Limbaugh’s long-time idea that the White House has (until now) always wanted the subject distracting people.

The best part of the segment, though, occurred when Limbaugh began musing about other reality stars who could shake up politics. Perhaps, he suggested, Biggest Loser trainer Jillian Michaels could get Obama to release a budget plan.

Check out video below: