Limbaugh: GOP ‘Scared’ of Conservatives Like Cruz, Trying to ‘Rid Itself’ of Them
audio

Limbaugh: GOP ‘Scared’ of Conservatives Like Cruz, Trying to ‘Rid Itself’ of Them 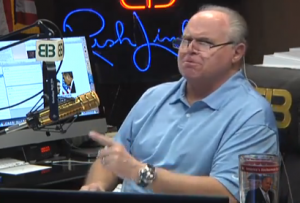 Rush Limbaugh took on the Republican establishment on Friday, saying that while conservatives are busy defending the party brand from attacks by Democrats and the liberal media, the main players in the GOP are too “scared” of the attacks and too afraid of the true conservatives in their party to stand with them.

Limbaugh took note of how in much of American culture, the word “Republican” has “become a pejorative,” automatically associated with racism and all the bad things of the Bush era. He said the liberal media has “done to the word ‘Republican’ what we have done on this program to the word ‘liberal'” but it works because the Republican party “doesn’t join our efforts here.”

He argued the GOP is “so scared of its own shadow and so scared of its own tail” to fight back, and while he believed the media overhypes exactly how much the Republican party is in danger of losing its base, the GOP still has a problem in its inability to embrace the people who support it. Limbaugh said if the Republican party was a business, it wouldn’t be operating this way.

“They would improve the product, they would hire new leadership, and they would reintroduce the brand with a better marketing team. None of that’s taking place on the Republican side… The Republican party is essentially trying to rid itself of its best customers because it doesn’t like them.”