Limbaugh: This New “Call For Civility” Is Just “Censorship” From The Left 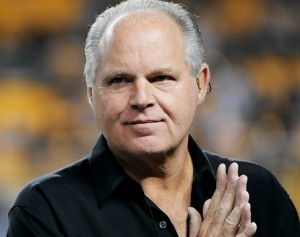 Today Rush Limbaugh wanted to make it perfectly clear that anyone thinking political rhetoric in the 1980’s was more civil than it is today doesn’t remember the Reagan era very well. Rush claimed the “hatred for Ronald Reagan was universal in the Democrat party and throughout the media” and that the discourse was just as vitriolic with Reagan being directly blamed for the spread of AIDS, homelessness and every other bad thing imaginable.

Why Rush discussed this history was to justify his skepticism about the left’s “call for civility” as nothing more than censorship. Rush declared, “liberals are demanding we abandon our principles” and refused to take part in ceasing to criticize President Obama and his policies. Instead, Rush believed political debate has always been heated, and Obama would not get a pass from him just because the media is trying to scare conservative voices with the label of “uncivil.”

Then to put an emphatic exclamation point on his refusal to go along with such “civility,” Rush declared his adamant opposition to the seemingly innocuous idea of Democrats and Republicans sitting together at the State of the Union:

“Republicans going along with this joint seating plan the Democrats have put forward for the State of the Union address is so preposterous, even symbolically, sitting next to each other . . . that’s another rip-off. All that is, is the Democrats trying to hide the size of the Republican majority in that chamber that night.”

Listen to the audio below from The Rush Limbaugh Show: