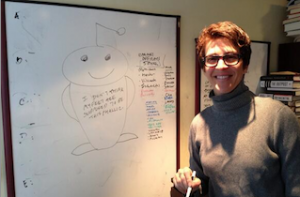 MSNBC host Rachel Maddow took to Reddit today for her first “Ask Me Anything” session with the site’s users, posting a photo of herself with a drawing of Reddit’s mascot on Twitter as proof that it was actually her answering the questions. She was primarily there to promote her book,
Drift: The Unmooring of American Military Power

, which was just released in paperback, but also covered a wide variety of subjects from media figures she admires to what kind of rye whiskey she prefers.

Asked to name a broadcaster from a network other than MSNBC who she admires, Maddow singled out Fox News’ Shepard Smith:

I really like the way Shep Smith (at Fox News Channel) balances anchorman gravitas… with a willingness to put the artifice aside and acknowledge what it really going on. Some of us can pull off seeming like human beings on TV, some of us can pull off V.O.G. authority, but Shep is really very good at both. Better than anyone else, I think. Also, I’ve met him and he’s a nice person!

Maddow discussed her complicated relationship with Ron and Rand Paul in light of the latter’s filibuster. She expressed her respect for both men and her regret that they have refused to go on her show since her infamous showdown with “Paul-the-younger” about the Civil Rights Act.

I really wish either of the Pauls would still talk with me the way they used to. I am not a Paulite myself, but I have both respect for and interest in the way they each approach aspects of Republican politics. They both gave up on me after my difficult interview with Paul-the-younger on the issue of the Civil Rights Act. But I hope they’ll reconsider someday.

She also expressed a hopeful outlook on gun legislation, which she doesn’t think is as “polarized” in reality as it appears to be in politics:

I think this issue is way more polarized in politics than it is in real life. Gun appreciation, even gun enthusiasm (which I confess to in a small way!) is absolutely not inconsistent with a belief in rational gun-safety reform. It’s weird that we think of the political battle as gun-lovers versus gun-haters — do you know a single gun-lover (who doesn’t work in the political side of the gun movement) who thinks it makes sense for someone adjudicated mentally ill to be barred from buying a gun from a guy at a store, but allowed to buy a guy under a tent or at a convention center?

And if you’re looking for suggestions on a good rye…

I love most rye, but if I had to pick a desert-island one, I would probably pick Michter’s. There’s a great one called “Pikesville,” too, but it’s really hard to find. I wouldn’t kick Sazerac 6 or Rittenhouse out of bed for eating crackers, though.