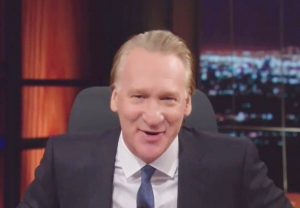 During the first debate between Donald Trump and Hillary Clinton, Trump continually leaned into his microphone to say, “wrong.” Seriously, he did it a lot; he just kept interrupting with “wrong.”

Tonight on Real Time, Bill Maher incorporated it into his “New Rule,” which was, “In the next debate, when Donald Trump starts going on about how everything in this country is a total disaster, Hillary must lean into the mic and say, ‘WRONG!'”

He went on to explain, bit by bit and stat by stat, why Trump is wrong about how dire times are in America right now, expressing fury that those who think the country is in “hell,” as Trump has said, make an average of $72,000 a year.

“The only thing poor about them is their judgement,” he quipped. Later, he attacked Trump voters again, saying, “They’re kindred spirits, these white men sitting at the end of the bar, nursing a gin and tonic because their dick doesn’t work anymore and life didn’t pan out the way they wanted so they sit there crabbing about how the system is rigged against them and America’s not winning anymore and we’re getting pushed around by everybody — China and Mexico and women and blacks, who have so many advantages over white people! At the convention, Trump said, ‘I am your voice,’ and for once he wasn’t lying. He is your voice because you’re a whiny little bitch.”