Marco Rubio Unsure How Old The Earth Is, Calls It ‘Dispute Amongst Theologians’ 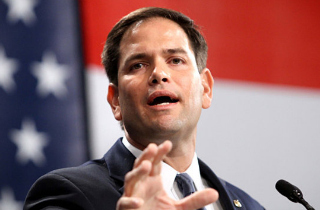 In an interview with GQ magazine, Sen. Marco Rubio (R-FL), expressed skepticism at the scientific consensus that the Earth is roughly 4.5 billion years old.

Directly asked how old he thinks the Earth is, the popular Florida senator replied: “I’m not a scientist, man. I can tell you what recorded history says, I can tell you what the Bible says, but I think that’s a dispute amongst theologians and I think it has nothing to do with the gross domestic product or economic growth of the United States.”

He continued to chide the question for having little relevance to the issues at hand: “I think the age of the universe has zero to do with how our economy is going to grow. I’m not a scientist. I don’t think I’m qualified to answer a question like that.”

Rubio eventually gave a clearer snippet of his beliefs: “At the end of the day, I think there are multiple theories out there on how the universe was created and I think this is a country where people should have the opportunity to teach them all. I think parents should be able to teach their kids what their faith says, what science says. Whether the Earth was created in 7 days, or 7 actual eras, I’m not sure we’ll ever be able to answer that. It’s one of the great mysteries.

Of course, to most scientists, the Earth’s age is not much of a mystery. But those who follow a strict interpretation of the Bible regularly dispute the chronology put forth by scientists… and it is a popular position among Republicans. In June, Gallup found that 58% of Republicans take a creationist view of the world — i.e, God created humans in their present form within the last 10,000 years.