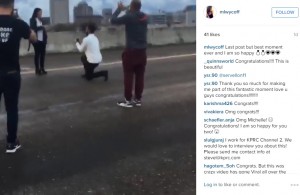 An impromptu marriage proposal on one of the busiest highways in the country caused traffic, angered commuters and inspired the Internet’s wrath on Sunday.

The Houston Chronicle reports that Houston resident Vidal Valladares Navas proposed to his girlfriend Michelle Wycoff with the help of several friends who, putting his love above their lives, stood in front of traffic on I-45. The blushing bride-to-be posted video of the incident to Instagram on Monday.

Valladares Navas told the Chronicle that he “just wanted to do something different.” Unfortunately, this “something different” incurred a cautious blessing from the Houston Police Department and the audible (and readable) anger of commuters and Internet commenters alike.

“It appears we were not called to the scene and it more than likely happened quickly before our officers saw it on patrol,” HPD spokesperson Victor Senties told the paper. “While we’re happy for the couple, this is not something we would want to encourage anyone to do. People could have lost their lives stopping on the freeway like that.”

To curb anyone from emulating Valladares Navas’ public display of affection on I-45 or any other major traffic arteries in the city, Senties delivered a warning: “If there was a similar scenario and the officers were called to the scene to witness it, the officers would tell them to clear the roadway and if they refused, they could be arrested with blocking a roadway, which is a Class B misdemeanor.”

Just saw someone post a dangerous marriage proposal, in where he and his friends dangerously stop ALL traffic on I-45, they could have hurt many others.

Reddit, meanwhile, took things a step further. “Idiot shuts down a major highway in Houston, TX for marriage proposal. Five cars down was a couple rushing to the hospital to perform a C-section,” claimed one post.