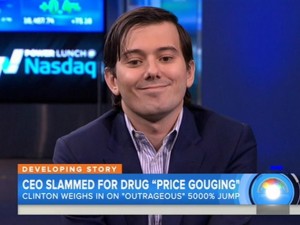 It seems that “Pharma Bro” Martin Shkreli has not only forgiven Donald Trump for insulting him, he’s endorsed the mogul for president. The former CEO gave Trump his vote of confidence on Thursday, and its led to Shkreli getting barraged by sarcastic questions and internet trolls.

Shkreli’s choice for the next president is an interesting one, especially since Trump once called him a “spoiled brat” when asked about his infamous price-gouging. Vanity Fair did a profile on Shkreli not long afterwards, where he responded to Trump with a “f*ck” him. Shkreli later tried to donate to Bernie Sanders, but the senator rejected his offer.

Shkreli usually passes the time these days by going back and forth between being an online rabble-rouser and waiting for his securities fraud trial to conclude. His latest tweets, however, show him getting political.

I haven’t been called by the Trump camp. I support him vs. Hillary. He should find a VP candidate who is seasoned in politics, an ugly game.

all you people who don’t like trump are jealous, stupid and poor! don’t make me laugh! and if you are employed by media you are worthless.

FWIW dont think we need to ‘make america great again’. it’s pretty amazing. a poor kid from brooklyn can grow up to be your boss (and hero)

Shkreli retweeted and responded to some messages showing a positive reaction to his endorsement:

On the whole though, it seems like Shkreli took on a wave of online pranksters, fake Trump accounts, and miscellaneous trolls.

@BuzzFeedAndrew no, i love my country too much. my gifts to the world belong in private service, not public.

also stop tricking honest trump important person/celebrity endorsers like me that you are him. you will be sued. https://t.co/ziT4mC37mC

Even when people pointed out that he was talking with fake Trump accounts, Shkreli went on unfazed for a while.

yeah its the realDonaldTrump is what it says stupid https://t.co/TWh9suksuk

nope i triple checked it and back traced the account https://t.co/1CfrFuzBhj

i totally didnt notice that until like two hours later. i still don’t see it. so tricky!!! https://t.co/RSc9f8HFW9