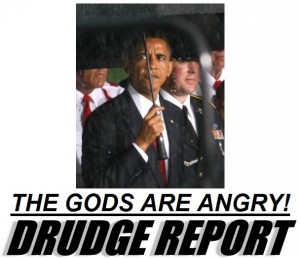 In the run-up to Memorial Day this year, conservatives expressed varying degrees of selective outrage that President Obama would “not honor our troops,” sending Vice President Joe Biden to Arlington National Cemetery. Of course, the President was scheduled to attend a ceremony at Abraham Lincoln National Cemetery in Illinois, but I guess those soldiers are somehow less worthy in conservatives’ eyes. It was only a matter of time before someone suggested that the thunderstorm that shortened the President’s speech was the will of almighty God. Enter Matt Drudge.

In Drudge’s defense, I am certain that, had the same thing happened to President George W. Bush, there would have been an equally short countdown before someone on the left called it karma for the Iraq War. I also give him credit for using the plural “Gods,” perhaps a nod to Battlestar Galactica.

He also might be referring, more broadly, to the current state of our oil-sullied, economically challenged, war-embroiled nation, but that’s an even odder premise.

I’m inclined to agree that this entire meme amounts to a sickening politicization of a solemn occasion. One of the more high-profile purveyors of this crap, CNN’s Erick Erickson, has an interesting rationale for why it’s OK for a gang of GOP presidents to skip the Arlington National Cemetery ceremony, but not President Obama:

The problem for Barack Obama is simple.

The troops don’t like him no matter how much the White House propaganda machine tries to gin up staged pictures of Obama voting soldiers fawning all over him. But see the tepid response from cadets at West Point or talk privately with lots of soldiers and sailors and you get something else — they fundamentally do not respect their Commander in Chief.

Well, if Erick Erickson says it, it must be true, right? He probably spends a lot of time at West Point, shooting the breeze with cadets and such. Never mind the fact that, despite being misled by the McCain campaign regarding Obama’s support for the military, then-Senator Obama outdrew McCain 6 to 1 in donations from troops overseas. Never mind the fact that the soldiers who fight and die for this country deserve to be honored without political distraction, no matter who they voted for.

Still, since we’re crassly passing judgement on how people choose to spend their Memorial Day, I wondered what effort Erickson made to honor the fallen. I checked out his Twitter feed, and the face of the conservative movement seems to have spent his day tooling up for an appearance on Hannity.

Surely, he must have posted something on Redstate, though, right? I mean, he expended 500 words on what a shitheel Obama is, so his deep thoughts on our fallen heroes must’ve been epic. Actually, he copied and pasted the US Army General Order governing Memorial Day, and didn’t even throw them a link. Words written by Erick Erickson: ZERO. Hell, even people who phone it in have to hit 7 keys.

Why does Erick Erickson get a pass, but Obama doesn’t? You tell me. What are the key differences between Barack Obama, who honored our fallen heroes at a National Cemetery, and Erick Erickson, who all but ignored them? Make a list, get back to me.

In fairness to Erickson, an objective observer could easily discern that the subtext of his post is that words cannot adequately express the grief and gratitude that is owed our fallen heroes. More importantly, the handling of grief is intensely personal, and I don’t believe it should be the subject of petty snark and nastiness. That’s really the point. The entire premise of this debate is a sick distraction from a day that has already been overtaken by blowout sales and barbecues. People like Erick Erickson ought to spend their energy on Memorial Day focusing attention where it belongs: the sacrifices made on our behalf, by people who never asked what we had done to deserve them.