Mediaite’s AJ Delgado To Hannity & Marc Lamont Hill: White Liberals Want Black Conservatives ‘On The Back Of The Bus’
audio

Mediaite’s AJ Delgado To Hannity & Marc Lamont Hill: White Liberals Want Black Conservatives ‘On The Back Of The Bus’ 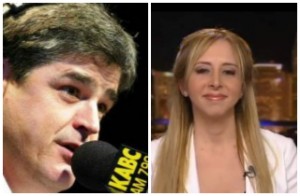 Mediaite’s AJ Delgado returned to Sean Hannity‘s radio show on Wednesday afternoon, where she questioned, in part, why African-Americans support the Democrats in overwhelming numbers, when Democratic policies have done nothing, according to Delgado, to improve the economic conditions of black voters’ lives. Marc Lamont Hill clashed with Delgado over that point, but conceded that there is a “sense of paternalism” in the Democratic party for African-Americans.

After some back-and-forth about the White House having parties while the economy is still doing poorly, which Delgado called “insensitive,” Hannity brought up Senator Rand Paul giving a speech at Howard University, in which Paul made the case that Obama and the Democrats have been bad for the black community. Hannity expressed amazement that the black community still votes for the Democrats in overwhelming numbers. Hill replied that black America is suffering economically not because of Obama, but because of deregulation and other economic policy over the past few decades.

RELATED: Mediaite’s AJ Delgado To Sean Hannity: Black Conservatives Like Ben Carson Are ‘A Huge Threat… To The Left’

Delgado interjected to point out that this is exactly why it’s so mystifying that the vast majority of African-Americans vote Democrat: they’re supporting very policies that haven’t worked for them for decades. Hill insisted things have been dismal regardless of which party occupies the White House. He made the case that things would be worse today under President Mitt Romney, and said it’s a matter of choosing the lesser of two economic evils for the black community, to which Delgado countered, arguing that a Romney presidency of slashing tax rates and economic growth would have improved the lives of “hard working African-Americans.”

Hannity brought the conversation to the special he did on his TV show this week, a townhall format featuring black conservatives. Delgado noted she’s received a huge amount of criticism for her Mediaite posts on the subject, and credited Hill for agreeing with her point that minority conservatives are unfairly maligned. Delgado also brought up Dr. Carson’s remarks on Hannity’s town hall, where Carson stated he had received messages from other black conservatives expressing their support but asking to be kept anonymous, which Delgado deemed “frightening.”

Hannity asked why there is such “institutional racism” against black conservatives that is met with “chilling silence” on the left. Hill suggested it might be “unreasonable” to think liberals would be strongly defending conservatives, no matter their race, though he did make it clear they ought to be more vocal in condemning racist attacks from the left. Delgado argued that, in contrast to Rev. Leon’s recent remarks that the “captains of the religious right” want to see blacks on the back of the bus, it is actually “white liberals [who] want to see black conservatives on the back of the bus,” noting there is an undercurrent of racism with their ‘shut up and know your place’ attitude towards black conservatives, with Hill admitting there is some “paternalism” in the Democratic party towards black people.