Michael Brown’s Parents Speak to U.N.: ‘We Came Here to Get Justice’

Michael Brown’s Parents Speak to U.N.: ‘We Came Here to Get Justice’ 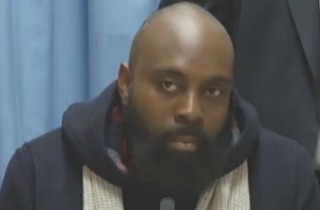 The parents of slain Ferguson teenager Michael Brown testified to the United Nations Committee on Torture earlier today on their son’s shooting, and they called on the U.N. to take action against such inhumane treatment like that in the United States. The written statement [PDF] they provided beforehand to the committee argued that both their son’s death and the excessive force by police in the weeks that followed were both “violations of the
Convention against Torture and Other Cruel, Inhuman or Degrading Treatment or Punishment.”

Lesley McSpadden, Brown’s mother, told the committee, “Whatever the grand jury decides in Missouri will not bring Michael back. We also understand that what you decide here may save lives. If I could have stood between the officer, his gun, and my son, I would have.”

In a news conference following their testimony, Michael Brown Sr. explained they came to the U.N. in the first place “to get justice for our son.” The Ferguson grand jury is expected to decide whether Officer Darren Wilson will be charged in Brown’s death, and residents and police are getting ready if he is not charged and people get outraged about it.

Meanwhile, Brown family attorney Daryl Parks addressed why they came to the United Nations in the first place. And as he explains it, Brown’s family has not been given proper redress by the local government and the United Nations would be a fitting forum for them to address such issues of injustice.

You can watch KSDK’s report on their testimony here (autoplay warning):

And you can watch comments from Brown and Parks in a news conference in Geneva here, via NBC News: