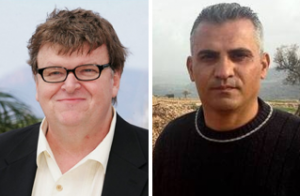 Filmmaker Michael Moore has been lashing out at BuzzFeed on Twitter over the last 24 hours after the site published an article Monday accusing Moore of over-hyping a situation that occurred last week at Los Angeles International Airport.

Last Wednesday, Moore sent out a series of tweets discussing the apparent detention of Emad Burnat, the Palestinian director of the Oscar-nominated documentary 5 Broken Cameras. Burnat allegedly reached out to Moore from the airport after Homeland Security refused to let him enter the country. Moore chronicled the saga over dozens of tweets, a few of which can be found below:

Several days later, BuzzFeed’s Tessa Stuart wrote that “sources” (plural) at LAX “challenged Moore’s account of the events, calling the allegations that Burnat was detained ‘baloney’ and asserting the whole thing was an elaborate publicity stunt for the film.”

When Moore saw the article, he set off on another Twitter tear, this time with his anger directed squarely at BuzzFeed:

Stuart responded to Moore fairly quickly on Twitter, in further attempts to get an official response from him. In lieu of a formal interview, the site posted his tweets on the matter at the bottom of the story. 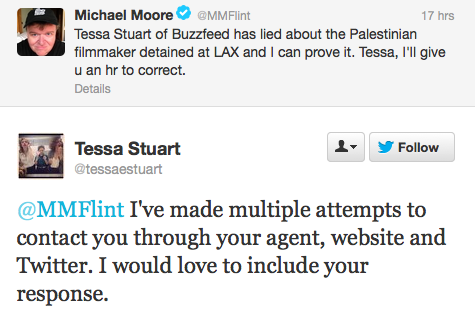 The site also added a single correction, saying “An earlier version of this article referred in its deck and first sentence to “sources” at LAX; in fact, as the body of the story made clear, the criticism of Moore’s account came from a single airport official.”

For his part, BuzzFeed Editor-in-Chief Ben Smith offered in own response on Twitter after The Guardian‘s Glenn Greenwald accused the site of “siding with government officials.” 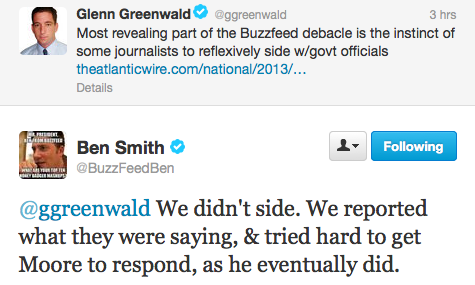 In the end, the story appears to boil down to Michael Moore’s word against that of a single airport security official. Perhaps Moore was using his fellow filmmaker’s situation to draw attention to the struggles of Palestinians, as Burnat’s film itself does. But that doesn’t mean the situation at the airport wasn’t as he described it. And, it seems equally likely that the source at LAX had his own incentive to play down the incident as to not embarrass the city of Los Angeles for unjustly detaining an Oscar nominee.