Mitt Romney On Rising Of The Seas: ‘I Never Imagined Such A Thing Is Funny’

Mitt Romney On Rising Of The Seas: ‘I Never Imagined Such A Thing Is Funny’ 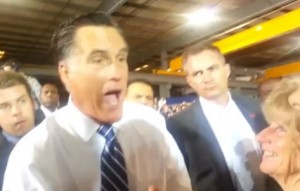 Thanks to the devastation wreaked by Hurricane Sandy, flippant global warming denial has become really bad politics at the most inconvenient time. For a normal person, making a joke about rising sea levels during a nationally televised political convention (which was postponed by a hurricane) might come back to haunt him. If you’re Mitt Romney, though, and someone confronts you about that joke, you just treat it the same way you treat global warming: as though it never even happened. At a campaign stop in Etna, Ohio on Friday, Romney was asked if he “still think(s) the rising of the seas is funny,” and simply replied “I never imagined such a thing is funny.”

This video is somewhat historic, in that Mitt Romney, for a change, was aware that someone was filming him. Unfortunately, someone was also filming him when he said this:

“President Obama promised to begin to slow the rise of the oceans.” (pause for laughter) “And to heal the planet.” (pause for more laughter at that stupid planet) “My promise is to help you and your family.”

“And if you and your family are hit by a hurricane,” that joke might be continued today,”my promise is to gut FEMA.” (standing ovation amid rain of tri-corner hats)

For years, that was Romney’s preferred dodge, allowing him to pay lip service to the issue, while giving him vover to do very little about it. Then, he just dropped the part about humans contributing to climate change.

He has, however, been fairly consistent on the issue of not doing a damn thing about it. Romney opposes every measure aimed at reducing greenhouse gasses, although sometimes in that weird “Elect Me As Your Hu-Man Leader” way of his, like when he was asked if he would leave the door open to cap and trade, and said “Oh, I’m not a man that favors taxes! So I’m not going to make a statement of that nature.”

Romney used to talk about “dramatically reduc(ing) our use of oil,” and of an Apollo-style project for energy independence, but his current energy plan, while perfunctorily playing with renewable energy’s tits, pretty much goes straight for the drilling. Maybe the idea is to use all of the carbon up at once, so we have to find alternative fuels. Or maybe his plan is similar to his joke. When the leader of the new race of fish-people (whom the Republican Party will no doubt alienate) kicks Romney out of the White House, he can just pretend it isn’t happening.