Moral Majority Leader Says Trump Is ‘Antithesis of Everything’ We Wanted

Moral Majority Leader Says Trump Is ‘Antithesis of Everything’ We Wanted 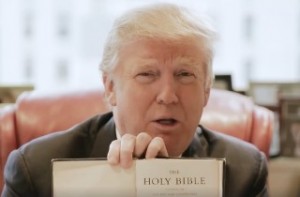 In an op-ed published in the Washington Post Thursday, Michael Farris, one of the earliest members of the Moral Majority movement, which sought to infuse Christian values into the Republican platform, condemned Donald Trump and the evangelicals who have flocked to support him.

The Moral Majority was established in 1979 by Baptist minister and segregationist Jerry Falwell, and Farris, currently chancellor of the evangelical Patrick Henry College in Virginia, attended the first meeting in 1980.

Trump’s “candidacy is the antithesis of everything we set out to achieve,” he writes. Falwell taught his followers that “believing Christians were not to be silent, nor the tools of any political party.”

“We are conservative, yes. And yes, the Republican Party has been the home of political conservatives,” Farris writes. “But we were to stand for principle. We wanted leaders who were closely aligned with a biblical worldview on the issues of the day, and we also wanted leaders of good moral character.”

Ironically, Falwell’s son Jerry Falwell Jr. was an early Trump supporter, and a recent photograph of Falwell Jr. and his wife standing astride Trump among images of Playboy magazine provided a stark display of the odd marriage between the Religious Right and the secular totem Trump.

We recognized, then and now, that no candidate is perfect, but we believed that there were certain lines which could not be crossed if evangelical support was to be forthcoming. If we say now that Trump has not crossed those lines, then we’re saying those lines never truly existed.

Trump has been all over the map on the biggest political issues of the day, including those most important to evangelical voters. His views on the sanctity of life, the definition of marriage, policies related to transgender individuals, limited government and religious freedom appear to have been written on an Etch A Sketch.

In a separate post, published Monday in the Christian Post, Farris was even more blunt. The meeting between Trump and evangelicals, he wrote, “marks the end of the Christian Right.”

He excoriated the many Religious Right figureheads who met with Trump; among them was Family Research Council’s Tony Perkins. (Perkins wrote in a blog post that the meeting was a productive conversation and that conservative Christians and Trump — however different — found common ground in both “refusing to surrender to the terms of political correctness.”)

Farris said that the evangelicals who attended the meeting were guilty of “saying we are Republicans no matter what the candidate believes and no matter how vile and unrepentant his character,” and Farris described them as “not a phalanx of God’s prophets confronting a wicked leader,” but “a parade of elephants.”

“In 1980 I believed that Christians could dramatically influence politics. Today, we see politics fully influencing a thousand Christian leaders. This is a day of mourning,” he concluded.