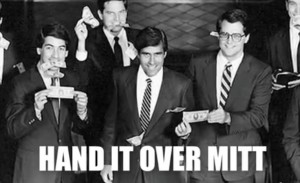 Most of the controversy surrounding Mitt Romney and his Mormon beliefs (remember the “Mormonism is a cult” drama from Robert Jeffress back in October?) has been buried by voter concerns about less-insane issues, like the economy. One rarely hears a comment about Romney’s faith on the campaign trail or in debates these days. But, in a strange twist, Romney’s offering of a $10,000 bet to Rick Perry in Saturday’s GOP debate, which has been hammered by critics — has been accepted in a new campaign ad by fellow Mormon Jon Huntsman.

In short, the only two candidates ostensibly trying to “gamble” in front of the American people right now are the two who practice a religion that is more fiercely opposed to it than any other religion practiced by the rest of the GOP field. And this connection is being pushed aside so everyone can hammer Romney for being out of touch with regular Americans. Is this cause for new drama? No. Should people be up in arms about it? No. Is it just a fun little ironic twist that most of the media has yet to hit on? Of course.

Most religions have minor beefs with gambling, but the Mormon faith — while not explicitly forbidding it — strongly opposes it (as well as state lotteries). According to the Latter Day Saints website:

Gambling is motivated by a desire to get something for nothing. This desire is spiritually destructive. It leads participants away from the Savior’s teachings of love and service and toward the selfishness of the adversary. It undermines the virtues of work and thrift and the desire to give honest effort in all we do.

Romney, to his credit, told Fox & Friends this morning that the bet was just an “outrageous” number he conjured up to counter outrageous accusations from Perry. And Huntsman’s ad wasn’t a serious acceptance of a bet, but, rather, a chance to highlight some of Romney’s past comments on the health care mandates by capitalizing on the offer (Although he did end the video with the phrase, “Hand it over, Mitt”).

Good clean fun? Or cause for excommunication and eternal damnation? Watch Huntsman’s ad below, courtesy of the candidate’s YouTube channel, and decide: