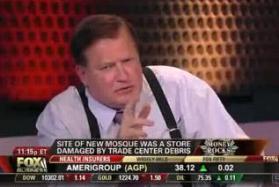 We’ve written a lot this week about opponents of the Islamic Center near Ground Zero saying ridiculous things or making absurd leaps.

But defenders of the plans in the media say ridiculous things and make absurd leaps too! Let’s not leave these people out.

Almost immediately a few people started talking, and then the conversation unfortunately moved on to Sen. Harry Reid. But Americans need to “get over 9/11”? Most Americans who do not oppose the mosque being built near Ground Zero are not doing so because they’re over 9/11 – especially not the large population of New Yorkers.

Then there was Mike Barnicle on Morning Joe this morning (via Politico). In his Day 2 attack on Newt Gingrich‘s offensive analogy, Barnicle takes a major leap himself:

It’s about the lowest common denominator of politics, taken there by people just like Newt Gingrich, former Speaker of the House, who apparently because he has had two badly failed marriages, quite publicly failed marriages, has now married his ambition to his ignorance on this issue.

Gingrich’s divorces have nothing to do with the issue at hand – in fact, you could make a case that bringing that into the debate contributes to the “lowest common denominator of politics.”

Here are both clips: