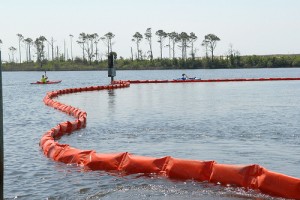 An AFP story Tuesday ran with the headline, “Gulf focus shifts, but where is all the oil?” The story essentially states that while clean-up efforts are in full swing after the well was finally capped, the crews are not finding very much oil in the Gulf; they’re actually wondering where it has gone. Well, Mother Jones has a response: it hasn’t gone anywhere. In fact, MoJo is criticizing the media for its reporting on the situation.

The AFP story begins with:

With BP’s broken well in the Gulf of Mexico finally capped, the focus shifts to the surface clean-up and the question on everyone’s lips is: where is all the oil?

Mother Jones‘ Mac McClelland calls BS and says she was able to find out there is still a significant amount of oil just by text messaging a few people:

I sent one text message to Bloomberg’s Lizzie O’Leary, who’s standing on Grand Isle, Louisiana, right now, asking how the beach looks. “Lower part past the barrier untouched with globs of oil that washed up last night,” she said. By “untouched,” she means by cleanup crews, and that “barrier” she’s talking about is the one the press isn’t allowed past. I sent another text to Drew Wheelan, who’s also in Southwestern Louisiana, doing bird surveys for the American Birding Association, asking him how big the biggest tar mat on Grand Terre—the scene of those now famous horrifying oiled-bird photos—is. “20 feet by 15,” he said. “But bigger ones submerged slightly.”

McClelland notes that while it is expected that BP would try to gloss over the extent of devastation in the Gulf, it is certainly not the media’s job to do the same thing.

Also on Tuesday, the New York Times sent out a news alert that read, “Gulf of Mexico Oil Slick Appears to Vanish Quickly.” Then came today’s Time magazine story with the headline: “The BP Spill: Has the Damage Been Exaggerated?” The piece begins by referencing Rush Limbaugh, who has been arguing that the BP Oil Disaster is not as catastrophic as most have been saying:

Well, Limbaugh has a point. The Deepwater Horizon explosion was an awful tragedy for the 11 workers who died on the rig, and it’s no leak; it’s the biggest oil spill in U.S. history. It’s also inflicting serious economic and psychological damage on coastal communities that depend on tourism, fishing and drilling. But so far — while it’s important to acknowledge that the long-term potential danger is simply unknowable for an underwater event that took place just three months ago — it does not seem to be inflicting severe environmental damage.

MoJo’s Kate Sheppard expresses her bewilderment at these news stories because of one reason: the truth is we do not yet know the full extent of damage the Gulf has sustained. The well may be capped, but in some ways, the problem has only just begun. As Sheppard points out, the relief wells haven’t even been finished yet. In short: this disaster is far from over. And Aaron Viles, campaign director at the Gulf Restoration Network, agrees:

“The amount of oil and toxic dispersant pumped into the Gulf is unprecedented, and we know the marine impacts will be massive, we simply don’t know how long it will take for the ecosystem to rebound, and how significant the decrease in productivity will be until it recovers,” [he said].

An unprecedented disaster inherently bears the possibility of yielding unprecedented consequences. Whether that is actually the case has become a topic of debate. But when the problem isn’t over, it seems premature to start taking sides.