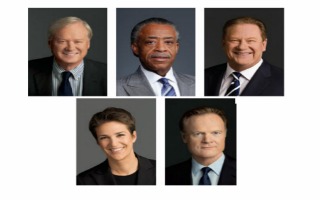 In March and April, MSNBC’s primetime hosts ran with nearly wall-to-wall coverage of the killing of Florida teen Trayvon Martin. They regularly suggested that the lack of national interest in the case was worthy of outrage. Last week, when an avalanche of new evidence favorable to George Zimmerman came to light, MSNBC’s primetime lineup didn’t just bury the story, they didn’t mention Martin or Zimmerman once the week that news broke according to media monitoring service TV Eyes.

On May 15, ABC’s World News broke new information that showed a more nuanced picture of how the altercation between Zimmerman and Martin unfolded. Their documents describe Zimmerman as having received “two black eyes” as well as a “broken nose.” They also outlined how Zimmerman was offered but refused hospitalization on the night of the incident.

MSNBC’s 8 p.m. anchor Ed Schultz led with the news that J.P. Morgan chairman Jamie Dimon would retain his chairmanship. “The big bank casino is still open and Republicans want to keep it that way,” said Schultz.

On May 17, Prosecutor Angela Cory’s office released hundreds of pages of information that further shed light on the murky events that led to the killing of Martin. Also released on that day was footage from the 7-Eleven where Martin was last caught on tape just minutes before his altercation with Zimmerman. New photos of Zimmerman’s wounds were also released on the 17th.

The new documents included an assessment that charges were actively considered from the beginning. “44th page of the documents released is that Christopher Serino, the lead investigator at the scene concluded that there was “probable cause” to charge Zimmerman with manslaughter,” writes Mediaite’s Jon Bershad. “ It isn’t immediately clear why this didn’t happen.”

On May 17, Schultz led with a report in the New York Times that alleged a pro-Romney group was planning to mount an advertising campaign that would link President Obama to his former reverend, Jeremiah Wright. “Mitt Romney doesn’t remember contributing to the climate of racism that simmers beneath the surface of the Republican party,” said Schultz. Washington Post reporter Ezra Klein, filling-in for 9 p.m. anchor Rachel Maddow, ran with a comparison between Republican reverence for President Ronald Reagan set against Democrat’s cautious pride in President Bill Clinton.

Those same documents revealed that an autopsy on Martin showed that he had TCH, the psychoactive chemical found in Marijuana, in his system and Zimmerman likely had Adderall in his system.

Even 6 p.m. anchor Rev. Al Sharpton who had seemed to make his show a platform for Zimmerman outrage, made no mention of Martin last week, after months of daily reporting.

The editorial decisions of MSNBC’s primetime producers would not merit this level of scrutiny but for the network hosts crusade in the months of March and April to see justice done in the Martin case. But as details about the case emerge and paint a far less definitive picture of what really happened –an even potentially sympathetic one for Zimmerman- the urgency of this story on MSNBC seems to have not just faded but evaporated.

To be fair, MSNBC dayside did cover the story as news according to TV Eyes but considering how often and passionately their primetime hosts focused on this story, it seems either purely ideological or beyond negligent for not a single show to have mentioned this big news.

Harvard law professor Alan Dershowitz has said based on the new evidence that “no fair jury would find anyone guilty here of second degree murder.” Whether that is true or not, the legal system is too important and sometimes explosive for any news network to be completely depriving its audience of relevant information. Especially in this case, which MSNBC’s hosts did so much to elevate.

This post has been edited since it’s original posting