Must Reads: It’s Not All Doom and Gloom for Senate Democrats (For Now)
MUST READS

Must Reads: It’s Not All Doom and Gloom for Senate Democrats (For Now) 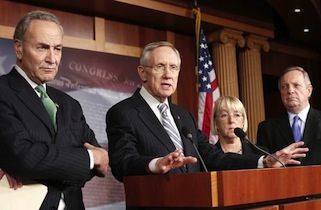 Every a.m., Mediaite publishes a primer of what the interweb machine is writing, talking, tweeting, and blogging about, so that you may fool friends and family into thinking you are a trove of information and insight. Today: a new poll finds that Democrats don’t have to despair about losing the Senate just yet; the undying myth of the Persuasive President; states that refused to expand Medicaid are costing themselves billions of dollars; and more.

The Upshot, the New York Times new data vertical, ran its second post in two days that should have Democrats breathing a tiny bit easier. Yesterday, the Times’ wonk team projected the Democrats had a razor-thin likelihood of retaining the Senate in the 2014 midterms, a fresh breeze after Nate Silver’s projection that they had a 60% chance of losing the upper chamber sent some folks into a tizzy.

Today, an Upshot/Kaiser poll found several contested Senate races to be closer than originally thought, with incumbent Mark Pryor (D-AK) holding on to a ten point lead over his GOP challenger, and embattled Democratic Senators like Mary Landrieu and Kay Hagan polling neck and neck with their opponents. (Challenger Alison Grimes also polled even with Mitch McConnell.) Republicans need to win six seats to take back the Senate, so if Democrats can eke out victories in some of these races, that’ll go a long way toward retaining the upper chamber.

“The Republican Party’s Plan to Retake the Senate Is Falling Apart” (Danny Vinik, The New Republic)

The Upshot isn’t alone in not gift-wrapping the Senate for the Republicans just yet. TNR’s Danny Vinik runs down the reasons the Senate isn’t a mortal lock for the GOP, starting with Obamacare’s improving numbers, and continuing with the gradually improving economy. “The odds are very low that Democrats pick up seats in the Senate,” Vinik concludes, “but the odds that Mitch McConnell becomes the majority leader in 2015 are falling as well.”

“The Most Enduring Myth About the Presidency” (Norm Ornstein, National Journal)

In a better world, this would drive the nail into the coffin of Green Lanternism:

When Obama had the numbers, not as robust as LBJ’s but robust enough, he had a terrific record of legislative accomplishments. The 111th Congress ranks just below the 89th in terms of significant and far-reaching enactments, from the components of the economic stimulus plan to the health care bill to Dodd/Frank and credit-card reform. But all were done with either no or minimal Republican support. LBJ and Reagan had willing partners from the opposite party; Obama has had none. Nothing that he could have done would have changed the clear, deliberate policy of Republicans uniting to oppose and obstruct his agenda, that altered long-standing Senate norms to use the filibuster in ways it had never been employed before, including in the LBJ, Reagan, and Clinton eras, that drew sharp lines of total opposition on policies like health reform and raising taxes as part of a broad budget deal.

[snip] The brutal reality, in today’s politics, is that LBJ, if he were here now, could not be the LBJ of the Great Society years in this environment. Nobody can, and to demand otherwise is both futile and foolish.

“It’s Getting Even Harder to Justify Not Expanding Medicaid” (Aaron Carroll, The Incidental Economist)

As we’ve covered, various red states’ refusal to expand Medicaid under the ACA has provided Republican lawmakers with a great (if untrue) talking point, while leaving hundreds of thousands of their citizens uninsured. As an evil bonus, that decision is costing those states a lot of money on top of the federal subsidies:

The CBO estimate does not reflect the substantial savings that states and localities taking the expansion will realize from no longer having to bear the costs for various health services they were providing to large numbers of people who were previously uninsured but now have Medicaid coverage. The Urban Institute has estimated that if all states took the Medicaid expansion, states would save between $26 billion and $52 billion in this area from 2014 through 2019, while the Lewin Group has projected state and local savings of $101 billion.

Optional musical accompaniment: I mistakenly claimed the other night that Agent Orange only had one song. I was wrong; they have two songs: