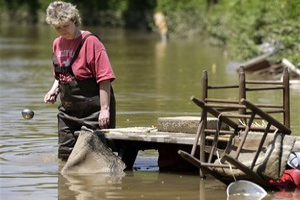 When media outlets are expected to report on at least five massive news stories at the same time, one of those will probably be left by the wayside. In his piece “Why the Media Ignored the Nashville Flood,” Newsweek‘s Andrew Romano suspects that the devastating flooding in Tennessee was the unlucky cause. Without a political angle or a patron in the media, he argues, there was no compelling reason for outlets to cover the story more than any of the other incidents, though, given CNN’s thorough coverage last night, Romano might have jumped the gun.

“Sheer volume of coverage has become its own qualification for continued coverage,” Romano notes, blaming the media of following its peers more than discovering stories on their own. If one major outlet takes to the Gulf oil spill or the Times Square bombing, the others will follow. It’s part of the competitive nature of the business, and usually the topic that proves most popular prevails. The tragedy of the people of Nashville, however, a place at the heart of American culture with plenty of star power to boast (a musical telethon was held yesterday to collect funds), should have made it into the news cycle, if only for the news that FEMA is succeeding in sending aid and, despite the destruction, spirits remain admirably high. But there is more to this than circular logic of the media only following stories the media follows.

According to Romano, the “narrative” of the Nashville flood was too straightforward and not as manipulable as the developments in the Times Square bombing or the Gulf oil spill:

The problem for Nashville was that both the gulf oil spill and the Times Square terror attempt are like the Russian novels of this 24/7 media culture, with all the plot twists and larger themes (energy, environment, terrorism, etc.) required to fuel the blogs and cable shows for weeks on end. What’s more, both stories have political hooks, which provide our increasingly politicized press (MSNBC, FOX News, blogs) with grist for the kind of arguments that further extend a story’s lifespan (Did Obama respond too slowly? Should we Mirandize terrorists?). The Nashville narrative wasn’t compelling enough to break the cycle, so the MSM just continued to blather on about BP and Shahzad.

Here Romano gets at something deeper, though he ignores one major factor: the media wasn’t really covering the oil spill all that much until earlier this week, several days removed from when the story broke. The round-the-clock coverage only seemed to take hold once the politicization began and pundits realized that there was a catchphrase in it for both sides (“drill, baby, drill” vs “Obama’s Katrina” and subsequent derivations of either). Unfortunately for the flood story, that coverage for the oil spill began to pick up a few days before the first flood warnings were issued in Tennessee (you can see the evolution of the oil spill coverage here). The Times Square bomb story also came to life on May 1st, anticipating the real damage in Nashville by a few days.

Perhaps Romano jumped the gun on this piece and the media is simply waiting out the halflife of the oil spill and terror stories before the dive into the damage in Nashville. They are already backed up on covering the oil spill story, and the emergence of a new terror plot only hindered that future. Compile that with whatever it was the stock market did yesterday and the riots in Greece, and that’s at least four days’ worth of backed up news.

There are some indications that the media is finally getting around to Nashville: Anderson Cooper covered the story live from Nashville last night, and both Fox and MSNBC devoting significant time to the flood as of yesterday. If Romano is right on his first point and media outlets do feed off of each other excessively, it’s quite possible other news sources will follow Cooper’s lead and give the story it’s due.