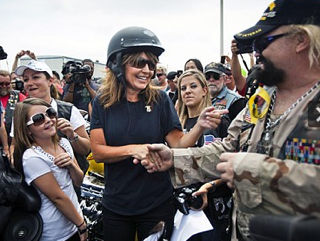 Sarah Palin is fired up and ready to go, but no one really seems to know where. Politico reports today that Palin has spent Memorial Day making visits to various historical sites but has kept most of the media out of the loop with the purpose of the tour, other than publicly stating that her vehicle wasn’t “a campaign bus” as news broke of her adding Iowa to her itinerary.

According to Politico‘s Andy Barr, Palin has “been unresponsive to reporter’s requests” or directed them to her website for updates, though nothing particularly interesting has yet to be found there. And then there is the little they have gotten out of Palin (well, other than her love of motorcycle exhaust):

Though Fox News captured Palin saying, as she got off the bus at one stop, that she thought a Republican could beat President Barack Obama in next year’s election, she has done little to encourage belief that the trip is a precursor to a 2012 run of her own.

“This isn’t a campaign bus,” Palin said, according to reports. “This is a bus to be able to express to America how much we appreciate our foundation and to invite more people to be interested in all that is good about America and to remind ourselves we don’t need to fundamentally transform America, we need to restore what’s good about America.”

That’s about all that she’s saying at most of her stops– some unannounced, others somewhat predictable– she is, after all, going on a tour of American history. While the addition of Iowa to the itinerary and her assertions that a Republican can wrest the presidency from President Obama indicate a desire to go out and rally voters for her cause, it becomes difficult to take her vague claims of not wanting to run seriously. On the other hand, there is nothing concrete on which to speculate that she is not merely trying to generate excitement among conservative voters for the Republican Party itself. In other words, like every other story this weekend, there is not enough concrete information to draw a conclusion, and it’s making for some shrugs and raised eyebrows all over the media– though that, of course, appears to be the intention.

Politico highlighted the confusion of, among others, Karl Rove, who called the tour a “rather unconventional style” of campaigning, and noted that CNN had reported on Palin fans going to the wrong historical sites trying to guess where she would pop up. Barr also spoke to Greta Van Susteren, who is following the One Nation Tour, but she said Palin’s people “don’t want the media following them, and that includes us.” Meanwhile, on Twitter, former and future TV host Keith Olbermann tried once again to catch Palin on a syntactical failure, correcting her use of “foundation” to “founding.” It is perfectly fair to assume that by “foundation,” Palin meant the foundation of moral and political principles on which conventionally American thought is based, and not necessarily the actual establishment of a nation.

And so the plot thickens, until Palin makes an obvious move towards or against beginning a campaign in sooth– a familiar pattern in this race, as the media has followed Donald Trump, Mike Huckabee, Mitch Daniels, and Jon Huntsman similarly.