New Study Shows High School Grades Up, But SAT Scores Down
A++++ 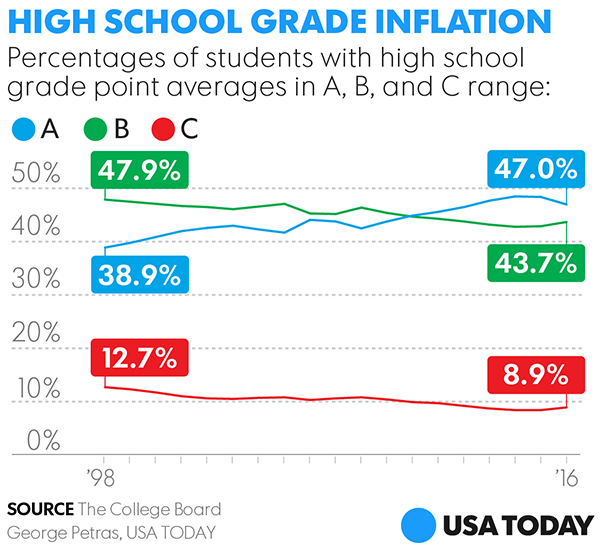 A new study shared some suspicious findings recently, while the number of A’s that high school students are receiving is increasing, the average score on the SAT is going down, leaving the question: What does an A really mean?

The study was done by Michael Hurwitz. an employee of College Board — the company that gives the SAT — and Jason Lee, a doctoral student at the University of Georgia’s Institute of Higher Education. They found that the number of high school students graduating with an A average climbed from 38.9 percent in 1998 to 47 percent in 2016. However, the average SAT score fell from 1,026 to 1,002 on a 1,600-point scale.

So what are these A’s actually worth?

The researchers suggested it might be an attempt to encourage more students to graduate high school, as the graduation rate is at an all time high at 83 percent. Still, the percentage of those who actually finish college within six years of starting is down to 56, so are these students not prepared for college because of the ease in high school?

The research also incorporated another study that looked at grades in college. According to Stuart Rojstaczer, founder of the website GradeInflation.com, A’s in college are now three times more prevalent than they were in 1960, with almost 50 percent of all grades are A’s.

“Grades are a bit like currency, so it’s not surprising that there is a tendency for grades to inflate over time,” Rojstaczer said. “But students are inclined to not take school seriously when they know they can get a B or better with little or no work.”