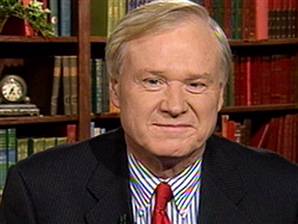 The conservative blogosphere is abuzz over Newsbusters‘ unearthing of a 2007 video that featured MSNBC’s Chris Matthews and the late Tim Russert discussing problems with the trajectory of Social Security, with Matthews calling it “a bad Ponzi scheme.”

MATTHEWS: […] If you think about it, what does [Hillary Clinton] gain if she says, Let’s raise taxes for Social Security, let’s raise the retirement age, let’s raise whatever, let’s reduce the benefits? What they want her to do is show some pain (ph) to the public, and she doesn’t want to do it.

RUSSERT: Well, Senator Obama had said that he had — would have everything on the table for Social Security, and now he’s limited that, as well. So all of them can be scrutinized. But I think, Chris, the important thing for voters who are watching this, it’s more than just a game of primary versus the general election. They’re waiting for leadership.

RUSSERT: And if you’re going to make tough decisions as a president, you have to answer tough questions. What are you going to do? Show us how you’re going the lead us. Everyone knows Social Security, as it’s constructed, is not going to be in the same place it’s going to be for the next generation, Democrats, Republicans, liberals, conservatives.

MATTHEWS: It’s a bad Ponzi scheme, at this point. Yeah

Newsbusters associate editor Noel Sheppard found it odd that when Texas Governor Rick Perry said something uncannily similar during a debate four years later, “(Matthews) and many of his colleagues in the press labeled it as unacceptable anti-American psycho talk.”

“It’s been perfectly acceptable for liberal media outlets and members to openly discuss the Ponzi-like nature of Social Security without being ridiculed as unhinged anti-Americans,” Sheppard said.

You can expect conservatives will use this old video as a trump card against Matthews if he ever tries to hold Perry’s feet to the fire on his comments about Social Security.