Newsweek: What Obama Is Missing Is His Own Dick Cheney 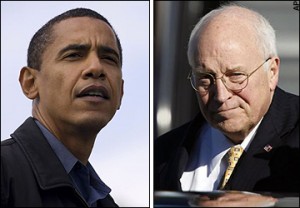 Like the presidents before him (and surely those that will follow), President Barack Obama has been on the receiving end of a wide array of critiques and assessments about his success or failure–and even more advice about what approach Obama should take. Following this trend, Newsweek is pointing out a missing piece in the prolific presidency: Obama is clearly in need of own Dick Cheney.

The piece, by Ravi Somaiya, argues that Obama’s policy and pragmatism is not the problem. His problem is politics and marketing:

Obama and his staff have proven policy chops but are  terrible at politics—they cannot, or will not, sell their ideas, especially in a sharp-elbowed partisan climate. It is a bizarre political universe in which the passage of health-care reform is actually being used to campaign against Democratic politicians.

The remark about his policy is a matter of political perspective and opinion. But Somaiya makes a good point when he says that his administration has had trouble selling ideas to the country’s citizens. He certainly hasn’t been able to sell ideas to Republicans. And whether we like it or not, this country runs on marketing.

Furthermore, there’s quite a bit of irony about this. Somaiya points out part of it:

It happens because the administration leaves a vacuum for Sarah Palin and other Republicans to fill with disinformation on Facebook or Twitter. From the perspective of political craftsmanship, if arguing that your health-care policy won’t kill grandmothers becomes a TV talking point, you have utterly failed to sell that policy.

In a sense, the death panels epitomized the Obama administrations inability to effectively market its agenda. Healthcare was a huge priority for the president throughout his campaign and he made it clear that he would do everything in his power to push through legislation. While this message got him elected, his healthcare plan had low support from the country’s citizens and no support from the GOP. Much of the rest of the world could not understand why America wouldn’t want healthcare reform–but within the country, the topic only incited the terms “death panels” and “socialist.”

Moreover, Somaiya points out that Palin and the GOP have spread misinformation through social media. Fancy that! The candidate who had an unprecedented Internet campaign is now seeing backlash from the same medium. The same method that essentially won Barack Obama the election is now weakening his actual administration.

But is a Dick Cheney counterpart the solution? Somaiya argues:

The need for a shameless political consigliere in the Obama White House is counterintuitive because the Obama campaign was particularly effective in 2008 by avoiding the perception of being a hard-nosed political operation. But like his presidency, that victory was characterized by meticulous planning and a reliance on its leader’s charisma. Instead of trying to set the agenda on the trail, Obama was consistently forced to mop up situations with searing speeches. He is still reactive, not proactive.

Some might argue that Obama already has a Dick Cheney: Rahm Emanuel. But while Emanuel is a force to be reckoned with, he is not powerful in the way Cheney was. The idea of Somaiya’s post has merit, but it’s a probably a good idea to keep the characterization of the former vice president out of the Oval Office.