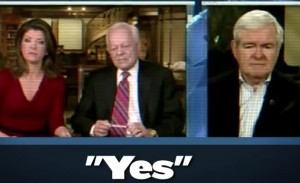 Former House Speaker Newt Gingrich is set to officially end his campaign today, and briefly express his support for presumptive nominee Mitt Romney (he’s expected to make an official official endorsement in a week or so), and while blunting the impact of a Gingrich endorsement is like trying to stop a runaway freight train made of balsa wood, the Obama campaign has made the effort anyway. The President’s reelection campaign released an ad ahead of the mini-endorsement that features some of Gingrich’s greatest Romney hits.

As the Jason Voorhees of presidential campaigns finally settles to the bottom of Camp Crystal Lake’s titular pond, you have to wonder why it’s the Obama campaign trying to cushion the effect of a Newt Gingrich endorsement, and not the Romney campaign. The former Speaker enjoyed a brief moment in the sun when GOP primary voters wanted a lathery rottweiler to go after the Mau Mau Food Stamp president, but now that (only slightly) cooler heads have prevailed, why would general election Romney want to have to carry a favorability gargoyle around with him?

Nevertheless, it is the Obama campaign who’s trying to distance Gingrich from the guy he’s about to endorse, but the real point of the ad is to cleverly have Gingrich remind voters that Mitt Romney “can’t be honest with the American people,” that his Bain Capital “looted” companies, that Romney “ought to explain” his Swiss bank account, that “the Romney machine can drive down turnout” but is incapable of “inspiring positive turnout,” that Romney was “the most anti-immigrant candidate,” and that the answer to the question “Are you calling Mitt Romney a liar?” is “Yes.”

All in all, though, this is far from a comprehensive collection of Gingrich’s slams against Romney. We can probably look forward to a more complete collection from SuperPACs American Bridge and Priorities USA Action, who tend to favor the ED-209* approach to the Obama campaign’s more elegant light saber technique.

Here’s the clip, from the Obama/Biden Truth Team:

*Google Ads apparently has a sense of humor. This is the actual ad that appeared when I looked up that Robocop clip on YouTube: 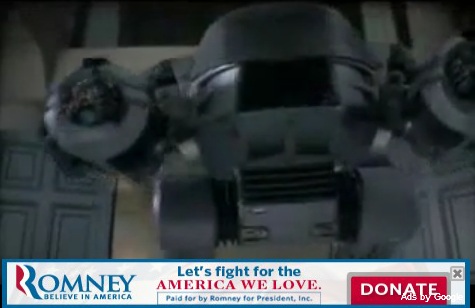