Gingrich: A Referendum Is ‘The Right Way’ To Pass Same-Sex Marriage Law

Gingrich: A Referendum Is ‘The Right Way’ To Pass Same-Sex Marriage Law 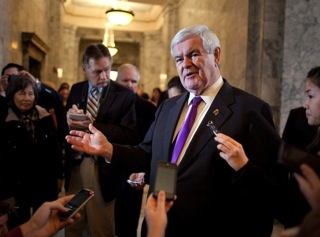 Newt Gingrich‘s official stance on same-sex marriage is negative, not believing it the province of the government to change the definition of marriage, but yesterday he appeared to approve of at least one way to pass a bill allowing same-sex couples to marry. “I would vote no if it were on a referendum where I was but at least they’re doing it the right way,” he told reporters in Washington state yesterday, approving of the way same-sex unions have been put on the ballot several times there.

Politico reports that Gingrich told reporters in Washington State yesterday that he did not agree at all with same-sex marriage, but that he thought the only “right way” to have it pass was by referendum:

Gov. Christine Gregoire approved of the gay marriage bill passed by her state legislature and publicly told the story of how she came around to supporting same-sex marriage, even offering to head over to New Jersey and convince Gov. Chris Christie of her position. Christie may be the most outspoken supporters of the referendum as a tool to pass same-sex legislation, vetoing a bill earlier this month on procedural grounds.