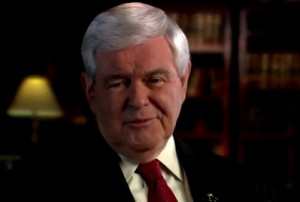 Current national Republican frontrunner Newt Gingrich released his first TV ad today, entitled “Is the America We Love a Thing of the Past?”

The spot is being supported by a near Tiffany-esque $250,000 ad buy in Iowa, where Gingrich leads steadily rising Ron Paul by 7 points, and is drawing comparisons to Ronald Reagan’s famous “Morning In America” commercial. However, a glaring difference between the two ads seems to make clear what the America Newt doesn’t love looks like.

Newt’s ad and “Morning in America” share gently uplifting music (Ed Morrissey recognizes Newt’s tune as part of the theme from Rudy), gauzy photography, and hopeful happy-talk in common, but within the first few frames, it becomes apparent what’s missing from Newt’s America:

The America I love actually has cities and oceans in it, but they’re notably absent from the one Newt’s “we” loves. In fact, the former House Speaker somehow manages to include a shot of the Statue of Liberty, without showing the cities or oceans that surround it.

By sharp contrast, “Morning in America” actually opens with a shot of both, and quickly dissolves to a shot of people crossing a city street:

In the decades since the Reagan presidency, and particularly in the last one, Republicans have increasingly sought to exploit a culture war between the “two Americas,”and there’s no greater warrior in that conflict than Newt Gingrich. His idea of showing love to the America that’s absent from his ads is to fire those people, and press their children into service at their parents’ old jobs.

While Gingrich’s contempt for coastal elites and “city folk” is evident, watching “Morning in America” again made me realize that the battleground dynamics of our electoral system seems to have gradually disappeared cities from pretty much all political ads, unless they’re exploiting national tragedies that happen in them. So pervasive is the politician’s need to kow-tow to cow towns that the soft-focus fetishization of middle America has become a staple of all political ads.

The other major difference is, of course, the ridiculous spectacle of a candidate following his own narration by saying, “I’m Newt Gingrich, and I approved this message.”

Ordinarily, my reaction to this is, “Yeah, I know,  it was you talking,” but in Gingrich’s case, that’s still no indication that he approves of what he’s saying.

The ad will play well in Iowa, though, and it’s a good way to kick things off, by at least trying to seize the high ground. With Ron Paul close in the rear-view mirror, though, and blasting Gingrich with brutal but resonant attacks, it won’t be long before Gingrich has to get down in the mud with him.