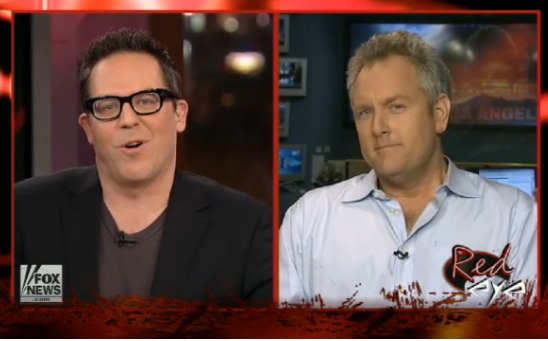 Hot off the heels of a career-defining weekend as CPAC’s Miss Congeniality, right-of-center Internet personality Andrew Breitbart took to Fox News’ late-night politically incorrect safe space Red Eye to chat with host Greg Gutfeld, giving the public a peek into the polemic’s mind the Monday after. This Breitbart, however, was not the blisteringly aggressive soldier of truth that strolled the hotel lobby for leftists to publicly humiliate in viral YouTube videos, but a jolly – albeit obstinate – David laughing at how quickly his Goliaths are going down.

Watching Breitbart defend his beliefs while shedding most of the outlandish behavior that has recently defined him to the conservative mainstream feels a bit like watching an out-of-body experience. Not that “Nice Andy,” as Gutfeld described it, was that much more restrained in using the lurid hyperbole that defines “Angry Andy,” – he described ACORN “prostitute” Hannah Giles as “one of the greatest people of all time” for her exclusive report on arch-nemesis Max Blumenthal picking his nose and his daily political wars on Twitter as “a borderline sexual fetish.”

The difference between the two is that, unlike at CPAC, Breitbart let everyone in on the secret that while his enemies are livid with anger, he is having the time of his life. Choice quotes like “I want it to be in the history books of saying that I took down the institutional left” may imply that he views himself as a major player in a Beckian “refounding” of American journalism. But ultimately – whether he intended it or not – there was a confession that, what many might interpret as uncontrollable anger, was simply the pure joy of, as he put it, realizing that “bullies crumble when you hit them back.” He probably felt comfortable letting down his guard because, well, what are the odds Blumenthal is up and watching Fox News at 3am?

Our White House reporter Tommy Christopher (who had his own colorful run-in with Breitbart at CPAC) had a slightly different take on “Nice Andy,” hinting that the light-hearted tone was actually conciliatory:

“Maybe I was wrong, maybe Breitbart is worried that he damaged his brand with his CPAC antics, but that was the real Andrew. He can be pretty calm when you’re not disagreeing with him, but when you do, get ready for random booger slam poetry.”

While it is possible that “Nice Andy” is a too-little-too-late attempt at damage control, it seems “Angry Andy” is really the only one the press cares to talk about. Before he started talking down bullies that dared question his integrity, Breitbart was a relative unknown. Now he’s poised to be the right’s next internet superstar. What incentive does he have to fix something that doesn’t seem broken?

Take a gander at the inner workings of Breitbart’s mind in his Red Eye appearance below: