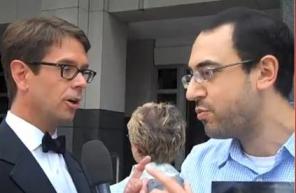 Gawker’s long-awaited, oft-attempted ambushing of Fox News producer Jesse Watters is now complete. So how did it go?

Gawker had some ambitious plans for the line of questioning it wanted to take once they caught Watters outside his residence. Instead, the display on Saturday was a halfhearted tongue-in-cheek letdown.

We introduced ourselves, said hello, and calmly approached him. He got in his car and drove away. We could have engaged some of the tactics that Fox has used in these situations – by say, running to meet him at his car and positioning ourselves so that he couldn’t close the door – but we didn’t want to, because we weren’t trying to engineer a confrontation. We were trying to engineer an interview.

So, what’s the point? The video Gawker provided shows the whole incident, complete with such pleasantries as “Mind if we ask you a few questions?” and closes with the gotcha question “Can we use your bathroom?”

But it’s not just Gawker that looks amateurish while trying to ambush the ambushers. Last week it was Griff Jenkins getting ambushed by an Openleft.com blogger, who ended up getting the tables turned on him while rehashing a talking point from 2004.

Why is it so hard to beat Fox News at the ambush interview game? As Gawker’s John Cook writes, “Not being complete dicks, we decided to approach it differently.”

Attempting to take the moral high-ground defeats the purpose of the exercise – if you’re not going to be “dicks,” you just end up looking like, well, pussies.