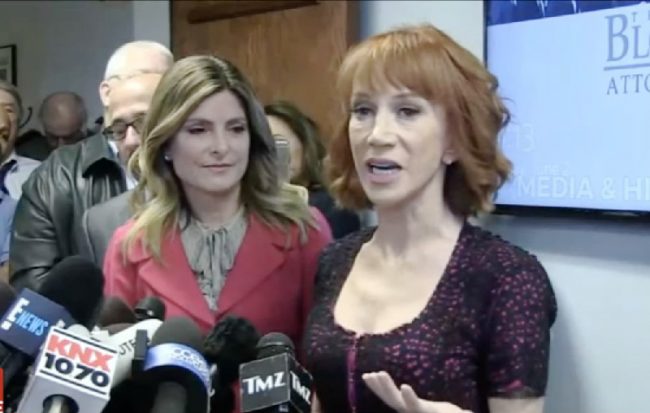 At the presser, lawyer Lisa Bloom said that the picture was a parody of Trump’s own sexist remarks while making the case that Griffin has been the victim of targeted bullying by the president. Griffin claimed that she has received death threats over the photo while exclaiming that Trump had broken her, killing her career in the process.

Well, as you’d expect, Twitter was all over this, and we saw all kinds of reaction.

Conservatives had a lot of thoughts on the event. A lot:

"What’s happening to me has never happened ever…" -Kathy Griffin

No celebrity has ever held up a decapitated POTUS head either, Kathy.

Nobody feels bad for you Kathy Griffin. And nobody forced you to hold up a bloody decaptitated head of our president Isis style.

When the left demanded @seanhannity stop speaking, it was a noble cause. When we demand @kathygriffin stop imitating ISIS, it's bullying

You dont attack someone & play the victim when you recieve backlash

I must've missed the part when Trump put a gun to Kathy Griffin's head and forced her to destroy her career with a beheading stunt.

.@KathyGriffin is in show business people. She weighs her options before she acts. She's no victim, she's the predator! #Covfeve #Trump

Kathy Griffin is taking a page right out of the jihadist handbook — always blame the victim.

Some members of the media weighed in on the substance of the presser:

Lisa Bloom said @kathygriffin apologized after the photo and despite that she lost her job and received death threats pic.twitter.com/jl9mTS430W

Serious question: is someone filming all of this for a new @KathyGriffin reality show?

!! Secret Service reached out to Kathy Griffin, according to Bloom at this press conference.

We also got some good old fashioned snark:

Just throwing this out there:

This is the longest Kathy Griffin has been on television in years.

OK. That's enough Kathy Griffin for one lifetime. Thanks for your cooperation.

Jim Carrey, who came to Griffin’s defense earlier this week, had jokes:

Keith Olbermann felt the whole thing was beneficial for Trump, invoking Russia in the process:

To @kathygriffin and @lisabloom: you could not be doing more to help Donald Trump if you were Putin. Please stop this selfish nonsense.

And there were those who were complimentary of the presser:

I want women to know, "You can break a man's record." @kathygriffin, stay strong and stay bold.

You can believe that Kathy Griffin's photo shoot was dumb & even offensive and also be disturbed by intensity of the backlash against it.