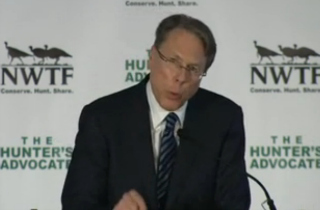 This afternoon, National Rifle Association CEO Wayne LaPierre delivered his organization’s response to President Obama‘s fourth State of the Union address. Speaking from the 37th Annual Convention and Sport Show of the National Wild Turkey Federation in Nashville, Tenn., the outspoken gun advocate admonished the president’s calls for a ban on “assault weapons” and on high-capacity ammunition clips, and accused him of engaging in widespread “deception.”

“In that speech, the president displayed a level of public deception that simply cannot be ignored,” LaPierre began. He explained that the first presidential presser following December’s Newtown massacre contained a pledge to make schools safer, and that despite this promise, the White House and the media scoffed at the NRA’s proposal for armed guards in schools.

The NRA chief then suggested that, during his Tuesday address, the president has betrayed his promise to put student safety above all else. “This was the address in which the president laid out his most ambitious agenda,” LaPierre said, but, “In an hour-long speech, nowhere were the words ‘school safety’ to be found.”

“Just think about that: less than two months after we had to look at our schools, the president made not one mention in his entire speech of the need to improve security for our school children,” LaPierre continued. “Nothing he proposed has anything to do with protecting one child in any school in this country.”

LaPierre then reminded the audience that a year ago, before Obama’s re-election, he warned that a second term for the Democratic president would result in “the most aggressive campaign in history to destroy our Second Amendment rights.”

He continued on to say that the president’s “charade” of proposing stricter gun control measures under the mask of protecting schoolchildren is now “over.” At the State of the Union, LaPierre said, the president exposed his own “fraudulent intentions.”

On the president’s background check proposals, LaPierre made the case that it would only affect law-abiding gun owners while the criminals will manage to slip through the cracks.

“None of it, from universal background checks to universal gun bans, does anything to keep children safer in our schools,” he said. “And the president knows it. He didn’t even mention it in his speech.”

“We will stand and fight,” LaPierre said of his organization’s intention to not back from combating any gun control efforts, eliciting applause from the crowd.