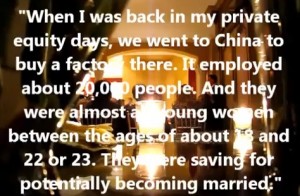 As President Obama campaigns on his administration’s ninth trade complaint against China, and while Mitt Romney hits back by lying about it, the President’s reelection campaign is attacking Romney’s China policy from another angle. They’re promoting a Boston Globe report on Romney’s investments that includes a viral hidden camera video showing the Republican candidate discussing, with donors, the deplorable conditions at a Chinese factory that Bain Capital was considering investing in.

The Boston Globe‘s Matt Viser reported on the many intersections of Mitt Romney’s criticisms on China and his business dealings, including a firm called Global Tech, a deal that was made long before Mitt Romney’s highly dubious “retroactive retirement” from Bain. While Romney can try to sell the idea that after 1999, he had no responsibility for the company he was sole owner of, he’ll have a harder time distancing himself from this deal:

Romney appeared to reference the Global Tech investment in a video that appeared on YouTube about three weeks ago. In the 2-minute video, which was shot surreptitiously and purports to be taken at a high-dollar Romney fund-raiser, Romney describes some of the spartan working conditions at a company Bain officials were planning to buy.

“When I was back in my private sector days, we went to China to buy a factory there,” he says. “It employed about 20,000 people. And they were almost all young women between the ages of about 18 and 22 or 23. They were saving for potentially becoming married, and they work at these huge factories.”

Romney said the women were packed into dormitories, 12 per room in bunk beds, and only earned a “pittance.”

The video in question features Romney telling donors the story of his visit to a factory in China, and detailing the grueling conditions he observed:

Over the weekend, Obama For America Press Secretary Ben LaBolt released this statement, pegged to the Globe‘s reporting and the video:

“As Mitt Romney tries to convince Americans he is a modern day trade warrior, it’s clear that his hypocrisy knows no bounds.  Before Mitt Romney started claiming he’d stand up to China and its unfair trade practices, he was profiting off of them.  Governor Romney even maintained his investment in a Chinese manufacturing company that relied on outsourcing American jobs after seeing its poor work conditions, which he described as surrounded by barbed wire and packed with 12 women per dormitory room.  When our competitors started a global race to the bottom, rather than placing a premium on creating American jobs and lifting the middle class, Mitt Romney dove in head first.”

The hypocrisy issue is the low-hanging fruit, in my view. What’s really disturbing about this video, almost comically so, is how thoroughly Romney swallows the story that’s fed to him by the people who ran that factory. The barbed wire and sniper towers? No, Comrade Romney, those are to keep people out. Oh, the girls who leave and never come back? They’ve “saved enough money.”

Now, I guess, they live on a farm upstate with Seamus.

Romney’s conflicting positions on trade with China, and his own enrichment by the business practices he now promises to fight, are not nearly as disturbing as his utter lack of skepticism when a foreign business leader tells him something he wants to hear. America can’t afford a President who is so willing to be led around by the nose, perhaps into a place he can’t get us out of. Been there, done that.