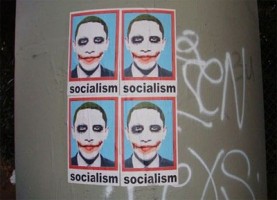 Turns out that the proliferation of Obama as Joker posters were not a purely viral movement, but rather a result of a contest held by the designer of the poster – a conservative radio host. So far at least one individual has been interviewed by Orlando-area police under suspicion of vandalism.

For the last few weeks, a poster of President Barrack Obama designed to look like the Joker character have reportedly begun to appear out of thin air. The sudden and significant viral poster movement confused many people about the meaning of the poster, as well as how it became so viral so quickly. Well now its been revealed to be part of a contest lead by conservative radio host Alex Jones.

Some have question the true meaning or agenda behind the image. The designer of the poster describes its meaning on the website Infowars:

The white face — and clowns usually hide their faces under white makeup (it is called “clown white”) — has nothing to do with an attempt to portray Obama as a white person. It’s about Obama as the Joker, and not necessarily the Joker played by the late Heath Ledger.

In 2009, the office of the president is nothing if not a wholly owned subsidiary of the international bankers. In fact the whole of Congress is owned by the banksters and their corporate minions, a fact the liberals consistently miss or are incapable of understanding mostly because many of them are beholden to foundations established by the same bankster elite.

Police in Clermont, Florida, which is outside of Orlando, questioned a teenager who was seen putting up the posters throughout the local area.  Charges have not been filed against the teenager yet because the amount of damage has not been fully calculated.

This news solves the mystery behind the proliferation of posters — many had presumed that it was a pure viral phenomenon — an honest demonstration of frustration with the Obama Administration. News of the contest behind it defangs the campaign to some degree — the motivations behind spreading thousands of posters appears to include the $1000 prize as well as anti-Obama sentiment.