Obama Urges Against Ebola ‘Hysteria’: It’s Not an Epidemic Here 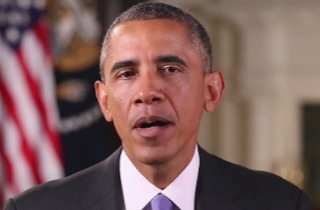 In his weekly address today, President Obama urged calm over the Ebola panic spreading in the United States. And that panic is actually spreading much wider than the actual virus itself, with the president making it absolutely clear there is no “outbreak” or “epidemic” in the U.S. just yet.

He said, “We can’t give in to hysteria or fear, because that only makes it harder to get people the accurate information they need.” Obama went over some basic facts about Ebola to explain how hard it is to actually catch and touted how five Americans had previously been successfully treated for Ebola in U.S. hospitals.

And once again, the president addressed calls for a travel ban. So far the only significant ban in place is on the travel of Texas health care workers who came in contact with Ebola patient Thomas Duncan. Obama argued that such a ban would be a bad idea:

“Trying to seal off an entire region of the world––if that were even possible––could actually make the situation worse. It would make it harder to move health workers and supplies back and forth. Experience shows that it could also cause people in the affected region to change their travel, to evade screening, and make the disease even harder to track.”

In comments earlier this week, Obama had said he has no “philosophical objection” to the idea of a travel ban, he just doesn’t think it’s a good idea.