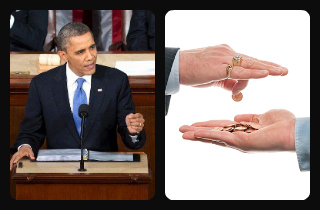 During last night’s State of the Union, President Obama proposed something many people will undoubtedly find appealing: a federally mandated $9.00 minimum wage. It’s intuitive to believe that government can simply force wages up, increasing low-skilled workers’ income, all without any unintended consequences. But the reality is that, no matter how well-intended minimum wage laws may be, they largely act as short-sighted means to benefiting some at the expense of low-skilled labor.

Many on the left erroneously conflate opposition to an increased minimum wage to “hating the poor” or not caring about employer “oppression” of so-called “wage slaves.” But that’s just a tactical diversion from the real discussion at hand: do mandated minimum wage increases do more harm than good?

The answer is, generally speaking, yes.

A preponderance of economic studies have found that minimum wage hikes tend to destroy jobs for many low-skilled, low-wage workers. Of course, some do benefit from the mandate — especially those employed by people who can absorb increased labor costs.

The fact that some do, indeed, benefit from minimum wage hikes (while many others either lose jobs or remain unemployed) is important to remember when understanding the history of the policy.

Throughout its near-century-long history, the minimum wage has long been used to benefit some at the expense of many. And early on, the politicians who supported the hikes were not so shy about the fact that their desired policy would hurt specific groups of people while benefiting their preferred interests.

To wit: back in 1931 when the federal government debated the merits of effectively setting a minimum, union-level wage for government-contracted work, the law’s proponents openly acknowledged that it would prevent black construction workers from competing with the all-white labor unions.

The AFL’s president William Green made his union’s desires clear, lamenting how “[C]olored labor is being sought to demoralize wage rates [in Tennessee]” and thus a wage mandate is necessary to prevent such competition. Rep. Clayton Allgood (D-AL) testified on behalf the proposal, referring to black labor as “bootleg” and lamenting how “labor of that sort… is in competition with white labor throughout the country.” Overtly racist supporters of the law got their way, and evidence shows that black unemployment began to deviate from white unemployment shortly thereafter.

Economist David Henderson notes several other examples of politicians being not-so-subtle about who would be the victims and benefactors of a mandated minimum wage hike. During a 1957 Senate hearing on the matter, Sen. Jacob Javits (D-NY) openly acknowledged that the northern-state industrial white worker often had to “unfairly” compete with the cheaper “colored worker” from the south.

One witness, NAACP Washington bureau director Clarence Mitchell, noted that northern whites probably feel a “constant threat that if [they] don’t accept the low wages that are being paid to them, some Negroes will come in [to] work for a lower wage.”

“Although probably no northern senator today would dare admit it,” Henderson wrote in 2002, “many who vote for increases in the minimum wage understand that one consequence will be to destroy jobs for the least skilled workers, a disproportionate number of whom are black.”

Indeed, history is filled with examples of people calling for minimum wage hikes for similar reasons: eliminating competition with the workers who would do it for less. During South Africa’s long-standing racial apartheid, white unionists argued for mandated wages because “in absence of statutory minimum wages, employers found it profitable to supplant highly trained (and usually highly paid) Europeans by less efficient but cheaper non-whites.” At one point, South Africa’s Wage Board openly said, “The method would be to fix a minimum rate for an occupation or craft so high that no Native would likely be employed.”

Of course, this is not to suggest that today’s minimum wage hike advocates have racist motivations. Every law has what’s known as “bootleggers and Baptists” — the bootleggers seek to benefit at the expense of others, the Baptists have pure-as-gold intentions — and I’d wager that most of today’s advocates have do-gooder intentions; and those who don’t aren’t acting out of racism anymore.

But golden intentions don’t necessarily mean golden results. And we should remember that before we dive headfirst into policy simply because it sounds good.