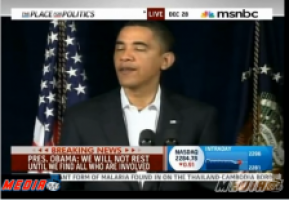 President Obama stepped away from his Christmas vacation in Hawaii to hold a short press conference in order to address Friday’s averted terrorist attack aboard Northwest Flight 253 as well as the escalating conflict in Iran. The President appeared without tie, or teleprompter, to reassure the nation that “we will not rest until we find all who were involved and hold them accountable” and that “the American people should be assured that we are doing everything in our power to you keep you and your family safe and secure during this busy holiday season.” He also announced that additional air marshals had been added to flights entering and leaving the U.S. The President did not take questions.

All of which is well and good, and exactly the sort of presser the President should have given three days ago — including the lack of tie and questions, because those are the sort of things you expect from rushed together statement from a president on vacation. Unfortunately, the casualness of his attire matched with the shortness of the statement, and the lack of questions felt a bit tone deaf considering the President and his advisers had the entire weekend to prepare for it. Moreover, they only served to underline concerns that the President perhaps did not have a grasp of the seriousness of the situation. Obama also “strongly condemned” the suppression of the protests in Iran (something he didn’t do back in June). Watch the full statement below.

Related: To Freak Out Or Not: Whatever Became Of The Terror Alert System?