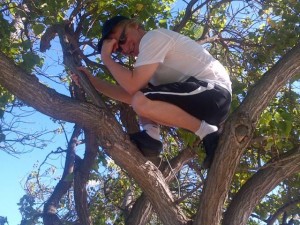 After successfully baiting conservatives with his profane Christmas Eve tweet, comedian and Real Time host Bill Maher continued his Twitter mockery of Denver Broncos quarterback Tim Tebow, including sending Twitpics of himself “Tebowing” in front of a Kim Jong-Il lookalike, and striking the iconic pose in a tree, or “Treebowing.”

Considering the content of Maher’s yuletide Tebow tweet, this is all rather mild, but it should still have the desired effect of making people who already don’t watch HBO threaten to stop watching HBO.

Bill Maher’s status as deliberate provocateur is well-documented, and much of the criticism he receives is well-deserved, but in this case, Maher is actually being funny and making some legitimate observations. His Christmas Eve tweet enraged some Christians, one of whom responded by wishing Maher would burn in Hell, but that tweet, plus his subsequent lampooning of the “Tebowing” meme, aren’t necessarily anti-Christian.

While Bill Maher often engages in the kind of smug atheism that gives the group a bad name, his critique of Tebow is far from groundbreaking, and as I’ve said before, has some resonance from a Christian point of view. His latest series of tweets can be seen as an additional critique of the “Tebowing” meme, in which people mimic Tebow’s endzone pose, not as a religious expression, but as a jokey trend along the lines of “planking” or “owling.”

If you don’t understand these internet memes, don’t feel bad. My kids had to explain them to me. Suffice it to say that the “Tebowing” trend, at best, trivializes Tebow’s Christian beliefs, but in doing so, also accuses Tebow of the same. Sure, Tim Tebow has every right to thank God for his touchdowns, but others are also free to ask whether God is investing time and energy into getting him into the endzone, or as Maher’s original tweet suggests, forsakes Tebow whenever the Broncos lose.

Maher has also cannily (if profanely) observed that the Tebow worship that has swept much of the nation can easily veer dangerously close to idolatry.

That is not to say that Bill Maher isn’t ecstatic at the thought of all this Christian apoplexy over his Tebow campaign, but in this case, there’s a little more to it than that.