Outrage! RedState.com Attacks Obama For Not Caring About Falkland Islands 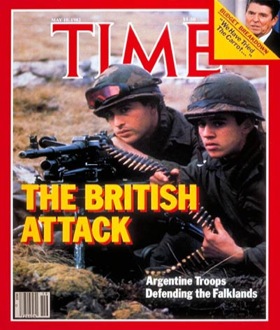 It’s 1984 all over again, and not just because everyone is terrified of Big Brother. Right-wing blog RedState.com is up in arms over what author Dan Spencer is calling President Obama’s “latest outrage”– his refusal to take a stance regarding the ongoing territorial dispute between Argentina and the United Kingdom over the Falkland/Malvina Islands (population: 3,140 people; 500,000 sheep). Yes: with a news cycle overflowing with conservative talking point headlines like massive global warming-disproving snowstorms, White House officials retiring, useless bipartisan talk sessions on health care, and a George W. Bush memoir, RedState.com is tackling the all-important issue of a small cluster of islands off the coast of Argentina inhabited by little more than 3,000 British citizens.

The last time we heard from the shepherds of the Falklands, Argentina’s military government was so reviled by its people that it chose the “Wag the Dog” technique of faking a war to distract from domestic scandal, making the unwise move of attacking Margaret Thatcher’s England, of all places, to stir the ever-present “Las Malvinas son Argentinas” nationalistic sentiment. The year was 1982. Tempers, apparently, have not cooled on the issue since then.

The British are understandably upset, given the traditional warmth between the United States and its former motherland and the fact that, in voting “present” on this issue, the United States leaves a question mark where a vehement “no” should be against Venezuelan president Hugo Chavez‘s anti-imperialist, socialist showman antics should be. This is the line of attack Spencer is taking:

President Obama, once hailed as our first European President, has thrown out the United State’s long-standing special relationship with our closest ally. Obama chose, under a false pretense of neutrality, to side with a corrupt, agressive [sic] Argentine government that is backed by Hugo Chavez and is threatening a blockade of British territory.

Sure, the British are pretty angry about being snubbed by the Obama administration in a relatively senseless way, but this attack on the part of RedState is a slap in the face to every other actually oppressive regime that the Obama administration has refused to rebuke properly. Just yesterday, for example, in the very same region, a political prisoner was put to rest after dying of a hunger strike 90 miles off our shores– in a nation Obama praised for its “progress” little more than a year ago. But don’t bet on finding Orlando Zapata Tamayo‘s name anywhere on Redstate.com. Instead, you’ll get fluff pieces defending the great name of the United Kingdom against the renegade socialist Obama administration that refuses to care about its petty squabbles with Argentina. You won’t find much condemning the rampant murder in Caracas, either, or the outrageous nationalization measures Chavez is taking against law-abiding Venezuelans. Instead, there are some tirades and bad Photoshop jobs, and some mentions in passing of socialism that only serve to further the site’s anti-Obama agenda. Even in their condemnation of his regime, they are self-centered– and that would be perfectly ok if the site weren’t pretending, through their stance on the Falklands and superficial opinion of Chavez, to have any concern about the suffering of oppressed people elsewhere. Truth in advertising is the least the site could do when they choose to pick their battles abroad.