Pat Buchanan Is Pretty Sure God Is on Putin’s Side

Pat Buchanan Is Pretty Sure God Is on Putin’s Side 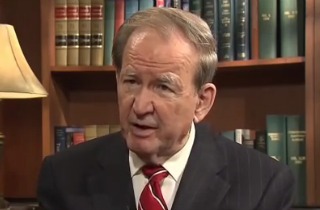 Of all the accomplishments of the 1980s of which most former Reagan administration officials are proudest, creating the conditions that led to to the collapse of the Soviet Union and the liberation of Eastern Europe are most often cited. Most, that is, except for former Republican presidential candidate Pat Buchanan. The one-time GOP rock star recently touted Vladimir Putin‘s devotion to conservative social values long before the revanchist Russian president used the chaos in neighboring Ukraine as cover for the invasion of Crimea. Now, after the first unilateral redrawing of Europe’s borders since World War II, Buchanan is making it clear where his loyalties lay — with Putin.

In an opinion post in the conservative opinion journal Human Events, to the extent that any coherent themes could be identified, Buchanan asserted that Putin believes he is positioning Russia as a country not merely opposed to Western power but also Western cultural decadence.

He opened the piece by reproducing much of Putin’s address to the Duma in which he cited ancient Russian history and origin mythology as the legal basis for his nation’s invasion and annexation of a neighboring country’s territory. Putin made certain to invoke a number of religious themes familiar to all Russians since the Kievan Rus and touted the Russian family — an institution declining along with the Russian birthrate — as bulwarks against “degradation.”

“With Marxism-Leninism a dead faith, Putin is saying the new ideological struggle is between a debauched West led by the United States and a traditionalist world Russia would be proud to lead,” Buchanan flatteringly declared. “In the new war of beliefs, Putin is saying, it is Russia that is on God’s side. The West is Gomorrah.”

Calling Moscow The Third Rome, a theme echoed by Orthodox Christians following the fall of Byzantium to Turkish invaders in the 15th Century, Buchanan again repeats Putin’s “claim” that Russia is “the counter-reformation against the new paganism.”

Not only is the Russian leader galvanizing global resistance to America’s “arrogant” acknowledgement that it is the sole global hegemon, Buchanan insisted, “[h]e is also tapping into the worldwide revulsion of and resistance to the sewage of a hedonistic secular and social revolution coming out of the West.”

After praising Russia’s banning of “homosexual propaganda,” abortions after 12 weeks of gestation, and “sacrilegious insults” to believers, the former Republican presidential candidate revealed that something called the World Congress of Families VII will be held in Moscow this year in solidarity with Putin.

“In the new ideological Cold War, whose side is God on now?” Buchanan asked.

Give the whole thing a read, when you get a chance. It’s quick and bone-chillingly mad. A student of history, Buchanan knows that the bloodiest regimes of today and yesterday, all of which were obsessed with avenging the imagined slights of the past, draped themselves in the trappings of religious symbolism. Their responsibilities were never to the present moment, but to a greater power or future generations. Lacking legitimacy for their actions internationally, these regimes appealed to the divine and/or posterity for judgement. Unsurprisingly, they surmised that the divine and posterity were supportive of their adventurism.

Buchanan knows this. But his distaste for a country he no longer recognizes has led him to cast his lot in with America’s enemies. What a truly sad end to the career of someone who once considered himself a patriot.