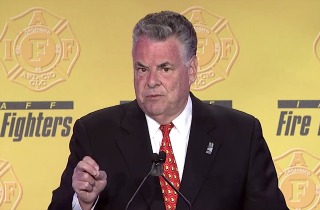 Rep. Peter King (R-NY) has made no secret of his disdain for Sens. Rand Paul (R-KY) and Ted Cruz (R-TX). Speaking to the International Association of Firefighters (IAFF) at their presidential forum, King lambasted the senators and implied they aren’t “responsible adults.”

“[Rand Paul] is concerned about drones, he’s afraid the CIA might use drones to attack Americans drinking coffee in Starbucks,” King said, drawing a few laughs from the crowd. He suggested ISIS might be further emboldened to attack America if the commander-in-chief thinks the “real threat” is the CIA killing Americans with drones.

King went on to say America needs “responsible adults” who can recognize the threats the country faces. At one point in the speech, he also criticized those who voted against homeland security funding but say they stand with the military and law enforcement.

Last year, King even suggested he would run for president just to prevent Cruz and Paul from having a strong influence on the Republican Party, and to make sure the “realistic foreign policy wing” or “national security wing” of the party “does not give in to the isolationists.”