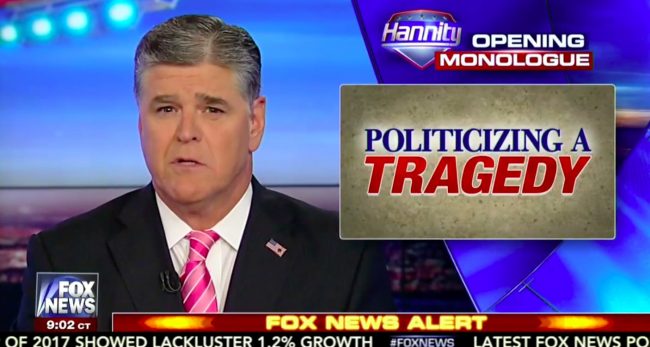 So last night news emerged that Donald Trump struck a DACA deal with his new friends “Chuck and Nancy” that included additional funding for border security which DID NOT INCLUDE THE WALL!

Now we don’t “know” all the facts and Trump equivocated almost immediately after Democrats released a triumphant statement, but it doesn’t really matter.

In the proceeding hours, Twitter promptly exploded at the news and Sean Hannity — one of Trump’s follow him into hell supporters — despaired.

The Fox News firebrand took to Twitter around midnight to voice his concern for Trump, and blamed Congressional Republicans for leading him to political suicide — if reports are to be believed.

“If reports true 100%. I blame R’s. They caused this. They wanted him to fail and now pushed him into arms of political suicide–IF TRUE.”

If reports true 100%. I blame R’s. They caused this. They wanted him to fail and now pushed him into arms of political suicide–IF TRUE. https://t.co/WTqe6jzfa9

That pronouncement was only the final rumination in a long tale of woe from Hannity.

Politicians are supposed to keep their word. R’s failed on Healthcare, broke their word They have failed! @POTUS needs to keep his promises https://t.co/NldKWcFrRB

And if @POTUS doesn’t keep that promise, and goes for amnesty, it will be the political equivalent or “read my lips, no new taxes” https://t.co/WxBSHYMxv6

Weak R’s have betrayed voters. @POTUS needs to stay the course and keep his promises or it’s over! Pelosi and Schumer can never be trusted. https://t.co/ky0NWvZoBv

I support the AGENDA. Help the forgotten men and women ignored and hurt by Obama and the democrats. That’s what matters. https://t.co/LhLxHkCkLj