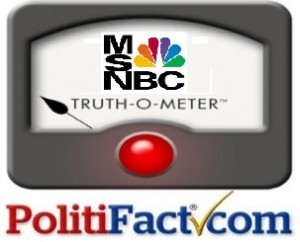 MSNBC primetime star Rachel Maddow has had something of a feud going with fact-checking outfit Politifact, going back about a year, which makes the timing of Politifact’s questionable ruling about Lawrence O’Donnell‘s Lean Forward “GI Bill” spot very interesting. They gave O’Donnell’s claim that GI Bill opponents called the measure “welfare” a “Mostly False” rating just days after Maddow’s most recent attack on the site, but nearly three weeks after O’Donnell made the claim.

On the Feb. 14 Rachel Maddow Show, the eponymous host slammed Politifact as a “disaster” because they gave Sen. Marco Rubio’s claim that “the majority of Americans are conservatives” a “Mostly True” rating, despite the fact that their own research showed that the claim was false to the letter, and false when measured against a broader standard. Based on Politifact’s own research, they would have to rate the completely opposite statement that “the majority of Americans are not conservatives” as 100% true.

Politifact responded, as is their habit, by dismissing, and ignoring the substance of, the criticism. This wasn’t the first time Politifact responded, in the same manner, to criticism from Rachel Maddow. What’s curious, though, is that two days later, they issued a very questionable ruling against Maddow’s primetime lead-out, Lawrence O’Donnell. Even more curious is the fact that they were evaluating a claim that O’Donnell made last month.

In the spot, O’Donnell extolls the virtues of the GI Bill, saying “”It’s the most successful educational program that we’ve ever had in this country — and the critics called it welfare.”

According to Politifact, they couldn’t find any record of critics using the word “welfare” to describe the GI Bill at the time, which means, at best, that O’Donnell’s claim might be “letter false,” as Rubio’s certainly was (Politifact can’t claim to have reviewed every contemporaneous criticism of the GI Bill from 50 years ago). But they did find ample evidence that not only supports the spirit of O’Donnell’s claim, it renders it an understatement. Among the nasty characterizations:

“The bane of the British Empire has been the dole system.” He also aired a racist comment, saying: “If every white serviceman in Mississippi… could read this so-called GI Bill, I don’t believe there would be one in 20 who would approve of it…  We have 50,000 Negroes in the service from our state and in, in my opinion, if the bill should pass in its present form, a vast majority of them would remain unemployed for at least another year, and a great many white men would do the same.”

So, while it’s true that no example of the word “welfare” has been cited (which doesn’t mean it never happened), criticism of the bill was unquestionably in the spirit of modern welfare politics, and then some. Based on Politifact’s own research, O’Donnell deserves at least the “Mostly True” that Rubio earned, but they didn’t even give him the fallback “Half True.” Judging by their past responses to legitimate criticism, even if references to the GI Bill as “welfare” came to light, Politifact would think up some reason why they’re still right.

That’s not to say that Politifact has an ax to grind against MSNBC, but when they’re issuing such a questionable ruling, so close on the heels of yet another back-and-forth with Rachel Maddow, yet so far removed from O’Donnell’s claim, the editors at Politifact really ought to consider how that looks. It’s tough to be an effective referee when people think you don’t like one of the players.

Politifact was contacted for comment on this article, but have yet to respond.