Obama Wins And Romney Loses Public Perception With Responses To Embassy Attacks, According To Poll 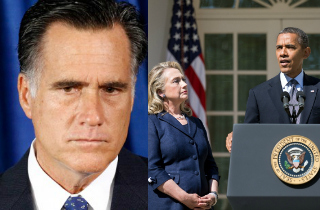 A Pew Center poll released Monday which surveyed reactions to the responses by both President Barack Obama and Republican presidential candidate Mitt Romney to the coordinated embassy attacks on 9/11/12 is raising eyebrows. The president is receiving high marks to his response to the attacks, with a plurality approving of his response. Romney, however, is receiving lower marks from the public.

RELATED: Chuck Todd: Middle East Crisis Could Be ‘One Of Those Things That Derails The Election’

According to Pew, 43 percent of American adults have been closely following the attacks in the Middle East that targeted American embassies after protests erupted in response to an American film that insulted Islam. 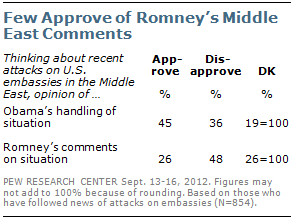