Polls: Americans Who Don’t Know About Syria Don’t Want U.S. To Get Involved

Polls: Americans Who Don’t Know About Syria Don’t Want U.S. To Get Involved 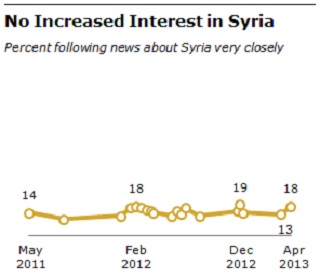 A new poll from The New York Times and CBS News shows that a large majority of Americans, 62%, think that the United States has no responsibility to do something about the situation in Syria, where an estimated 70,000 people have been killed by that country’s government forces. Perhaps more revealing, though, is that the percentage of people who said they were not closely following the news from Syria was nearly identical to those who wash America’s hands of the situation: 60%. That result is borne out by another new poll, from Pew, in which only 18% of respondents said they were following the Syria story very closely.

The unrest in Syria has been a confounding problem for years. Even if the public overwhelmingly supported some sort of intervention, President Obama would still have to thread the delicate needle between U.S. action and international considerations, the prospect of heavy U.S. cassualties from direct action, not to mention the possible aftermath of a U.S.-backed overthrow of Bashar al Assad. All of those factors could be coming to a head shortly with the Assad regime’s reported crossing of the chemical weapons “red line.”

The lack of public support for U.S. action is a complicating factor, one which appears to be partially driven by a lack of interest, and therefore a lack of information, about the conflict. The wording of the NYT/CBS poll question, “Do you think the United States has a responsibility to do something about the fighting in Syria between government forces and anti-government groups, or doesn’t the United States have this responsibility?”, makes the conflict sound less lopsided than it is. If they’d asked if the U.S. should do something to stop the slaughter of Syrian civilians at 70,000, they might have gotten a different response.

A recent Pew poll came closer to asking the question that way, and did get a markedly different result. Respondents in that poll overwhelmingly favored the U.S. and its allies taking military action than not (45% to 31%, respectively) if it is confirmed that Assad’s regime crossed the chemical weapons “red line.”

But the same poll showed that news about Syria is only the 12th most closely-followed story, and has barely moved the news interest needle in the past year. In May of 2011, 14% of respondents said they were following Syria very closely, versus only 18% in the most recent poll, taken after Secretary of Defense Chuck Hagel made his heavily-qualified announcement that Syria had used chemical weapons.

The “range of options” available to President Obama, as he put it, has been severely limited by obstruction from Russia and China, in addition to our own political and public will. I’m the last person who would want the United States to be pushed into war, but this situation has gone on far too long, with far too little done. I don’t agree with John McCain on a whole lot, but he is right that this situation will be a stain on our history, and if we’re worth a damn, our national conscience. There’s a long list of shameful episodes in which we’ve stood by and watched innocent people being slaughtered, in horrifying numbers, because we lacked the will to intervene.

This situation will eventually be resolved, the slaughter will eventually stop, and when it does, we will share the stain of it with the entire world. However, we will also know that whatever means are used to end the horrors, in whatever time frame, more could have been done, and done sooner, if we had only cared more about it.