President Obama Does Not Want Any Other Icons In His Shot 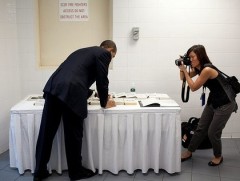 Considering the now years-long deluge of images President Obama has been the subject of you may have missed the fact he has apparently been intentionally avoiding iconic images. Who knew, right? A cynic might suggest that Obama has spent enough time turning himself into a sort of icon that he has no need for back up. Either way, he has no use for the Statue of Liberty as a backup player. From the Daily Caller:

The Obama White House has purposely avoided trying to cast the president in larger-than-life visual moments, eschewing the Hollywood-quality image-making that began with Reagan and was steadily improved under presidents Bush 41, Clinton and Bush 43.

There is a strong disagreement, between Obama’s top advisers and the men who made the last two presidents look good, over whether this is a wise decision. The criticisms from the small and select community of past image-shapers, in interviews with The Daily Caller, imply that Obama may have had an easier time selling health-care reform if he had done things the way they did.

The Obama team’s disregard for big pictures — Bush in front of the Statue of Liberty on the first anniversary of 9/11, Clinton visiting a refugee camp in Macedonia during the Balkan war, Reagan looking over the wall into the demilitarized zone between South and North Korea — is part of the current administration’s scorn for things as they have traditionally been done, which they typically lump into the category of “politics as usual.”

The people who like to take these sorts of pictures argue that Obama is confusing voters who have no idea where he is or what he stands for when there is no variety: ““How do you tell what he’s talking about when every speech is in front of blue drapes and flags?” How indeed. The White House is apparently hoping voters are paying attention to what the President is actually saying. A Obama speech is worth a thousand pictures?

Below, Ward discusses the Obama image-making machine with Tommy Christopher.