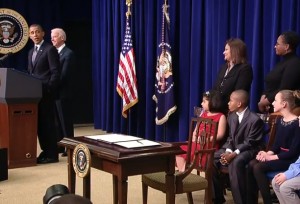 Following the President’s announcement of his proposals to reduce gun violence on Wednesday, nearly every member of the ostensibly “objective” media continued to insist, without any evidence, that passage of an assault weapons ban will be next to impossible. While there has been resistance, from congressional Republicans and Democrats, to voting on an assault weapons ban, President Obama pointed out, in his remarks, that the key to passing the most difficult of his proposals is simple: make them vote. The assault weapons ban is a “difficult vote,” not because it’s hard to vote for, but because it’s damned difficult to vote against.

Republicans like Sen. John McCain (R-AZ) and Democrats like Senate Majority Leader Harry Reid (D-NV) are among the chorus of lawmakers who insist that, despite overwhelming public support, an assault weapons ban can’t pass in this Congress. While Reid couches his objection in pragmatism, even McCain doesn’t come out and say he would vote against such a measure. The pre-Newtown Congress was a hostile place for gun regulations, but there really is no way to know how that tragedy affected the hearts and minds of the few dozen legislators who could swing things around for an assault weapons ban.

More than that, though, there is no way for legislators to know just how friendly the post-Newtown world will be to people who vote against reasonable, popularly-supported gun laws, and many of them would rather not find out.

The President knows this, and said so yesterday. He addressed a young girl onstage, named Julia, who asked him to “please try very hard” to pass laws that would make her safer.

“Julia, I will try very hard,” the President said, adding “But she’s right. The most important changes we can make depend on congressional action. They need to bring these proposals up for a vote, and the American people need to make sure that they do.”

Then, President Obama explained why merely forcing Congress to vote is so important. “Get them on record,” he said. “Ask your member of Congress if they support universal background checks to keep guns out of the wrong hands. Ask them if they support renewing a ban on military-style assault weapons and high-capacity magazines. And if they say no, ask them why not. Ask them what’s more important — doing whatever it takes to get a A grade from the gun lobby that funds their campaigns, or giving parents some peace of mind when they drop their child off for first grade?”

If Harry Reid, et al, succeed in preventing an assault weapons ban from even being voted on, then lawmakers will never have to look Julia in the eye, one way or the other. Let’s sat there are Senators and House Members who sincerely, honestly believe that voting against an assault weapons ban is the right thing to do for the country, for the children, and not just a way to keep their NRA rating. I believe there are, and if so, they should be anxious to cast their vote in defense of liberty, and to explain to Julia that more guns, of any kind, make her safer. They should demand it, and if there are enough of them, then it won’t pass. Then, in two years, they’ll find out if America agrees with them.

President Obama also spoke about one of the children lost in Newtown, a girl named Grace McDonald, who was seven years old when she was taken from her parents. She wanted to be a painter. “And so just before I left, Chris, her father, gave me one of her paintings,” the President said, “and I hung it in my private study just off the Oval Office. And every time I look at that painting, I think about Grace. And I think about the life that she lived and the life that lay ahead of her, and most of all, I think about how, when it comes to protecting the most vulnerable among us, we must act now — for Grace.”

That’s what people like Will Cain call an appeal to “emotion,” but what is really an appeal to conscience. If legislators truly believe that our children will be safer without an assault weapons ban, or that the proliferation of such weapons carries benefits that outweigh the risks to their safety, then they owe it to every one of those children to vote their conscience.

President Obama owes them, as well. When he looks at that painting in his study, he must be compelled to make them vote. Those lost to gun violence can no longer speak for themselves, and no one left behind can reasonably claim to speak for them, but it is the very least we can do to make sure that our leaders look them in the eye and speak to them. Make them vote.