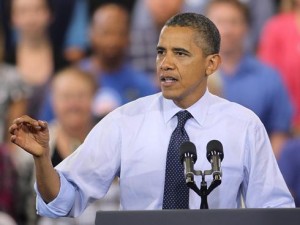 President Obama went after Mitt Romney in an interview with the Associated Press for taking “extreme positions” in the presidential race on economic and social issues that align him with “a number of House Republicans.” The president denied that he has any animus towards Romney, and said that in his second term, he is willing to make further compromises with Republicans in Congress in order to get more done in his second term.

Obama denied claims that he has a strong personal dislike of Mitt Romney, but did make the case that his Republican rival is far from moderate.

The president suggested that whatever Romney really stands for in life is secondary to the promises Romney has made in the campaign.

In explaining his accusation of “extreme” positions, the president cited Romney’s call for across-the-board tax cuts that Obama said would mostly help the rich at the expense of everyone else and cost the nation $5 trillion. Obama singled out Romney’s opposition to tax credits for producers of wind energy, the kind of issue that carries large political resonance in a battleground state such as Iowa.

And Obama alluded to the provocative issue of abortion, suddenly thrust to the fore this week when Republican Missouri Senate candidate Todd Akin said the female body has a way to “shut that whole thing down” when a woman is the victim of “legitimate rape.”

Obama acknowledged the economy is not where it should be, but argued that Romney hasn’t even “offer[ed] serious proposals” to help middle-class families. And as for the idea that he has a strong personal dislike of his Republican rival, he said that his issues with Romney “have to do with where we take this country forward.”